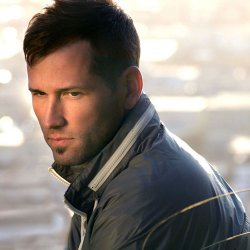 Ryan Raddon, aka Kaskade, felt like an outsider growing up in Chicago’s suburbs as a practicing Mormon.

“I felt really disjointed growing up in high school—here was this guy who didn’t play sports, who didn’t party. I didn’t really fit in, so I got into music.” Of course, he’s laughing about it now, not only because this year’s debut album has him pegged as one of the freshest new dance-music artists in America, but also because of where he went to school: the now infamous Glenbrook North. Of course, he’s still getting teased about his alma mater’s hazing scandal, even in his new home in San Francisco. But he doesn’t seem to mind too much. Life’s too good right now.


This spring’s release of the album “It’s you, it’s me” has been greeted by a flood of international publicity, culminating in his selection as Urb magazine’s “Best Up and Coming DJ” at this year’s Winter Music Conference in Miami. And the accolades are well deserved, for Raddon’s put together a fresh collection of deep, soulful house (and some downtempo) fueled by terrific vocals, engaging harmonies and crisp beats. Although the lyrics are stripped down, the songs are infectious enough to cross over from the dance to the pop charts.

When Raddon returns to Chicago this week for a set at Zentra, it will be his first time back in two years. But he’s never really left the town that sparked his passion, as a teenager in search of something, when he discovered the sounds of house music being played on the radio, on WBMX’s Hot Mix 5, and started venturing out to hear the DJs at Medusa’s, Limelight, Exit and Metro. He found a sort of home there: “The whole scene was a place to be, where open thinkers were hanging out,” he recalls fondly. His religious temperance was not a burden in this world. “One of my best friends was gay… the fact that I didn’t party was cool.” It was like “I’m a freak, you’re a freak, let’s hang out together.” The move from hanging out to joining in was more gradual. “I heard a commercial on WNUR for Gramaphone” and went to check it out. “I wasn’t buying twelve-inches because I expected to be a DJ, I just thought it was cool.”

He moved to Salt Lake City for college, and discovered that the vibrant house scene of his hometown was completely missing in the desert. So he started one, and spent five years in a club residency, building a solid following and making friends who would later play a big role in his music. After a two-year stint as a missionary in Tokyo where he went on a “hiatus from dance music,” he finished school and moved to San Francisco, his wife’s home turf and the center of “a really nice deep house scene.” It was there he made the “pivotal step” of getting a job at Om Records, the dominant West Coast house label and home to fellow Chicago expatriate Mark Farina. “I didn’t know anybody. I called Om and asked if they had any openings, and they said in fact they did. I worked as an A&R assistant for two-and-a-half years.”

It was while working at Om that he started developing the Kaskade identity and sound. He did so covertly at first, since he’d make a demo and then slip it into the label president’s stack. He tells of sitting in his office at the label and checking his personal voicemail messages and hearing the label’s boss trying to woo him. Before long, a deal was done.

With this new identity, he crafted a new sound. His earlier records had been “cutting up disco records—bangy, tracky tunes.” Now he was striving for a bigger, more musical sound. To get it, he turned to his Salt Lake City cohorts (some of whom had since moved to Toronto) who became his collaborators. The album features guitar, flute, trumpet, keyboards and so on, but the major players are the voices: Joslyn, Rob Wannamaker and Amy Michelle. All three bring deep lush vocals ranging from soul to R&B to the songs, and all three were folks Raddon met in Salt Lake.

Raddon’s also trying to bring his fresh ideas to the turntables for his DJ sets. He’s trying to play mostly original material, including new mixes of tracks on the album. Eventually he’d like to do a live show, but he himself doesn’t play any instruments. “I was a singer in the choir. I tried to sing on the record, but I wasn’t impressed with the way I sounded, so I cut myself.” Like everything he says, he says it cheerfully. In fact, his record reflects a rather upbeat worldview, as well as a PG-13 romantic sensibility in a music genre renowned for its XXX moments. He admits it might be the influence of his religious upbringing.

“I’m a pretty optimistic guy—that’s the kind of person I am. It’s all about love and happiness. But the sexual thing’s cool. I met my wife on the dance floor—actually I was DJing… .” Given that, who can blame him for making happy music?