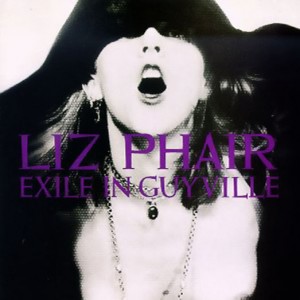 One day, walking home from school, 13 years old, I stumbled upon a CD caddy lying in the middle of an alley. No one in sight. Just the discs inside, no booklets. I picked it up, decided to bring it home with me. Quickly took in the first four discs, none of which made very much of an impact, and then the fifth, with faded blue artwork and no text indicating who the artist was, nor the album’s title. The sound, of course, was unlike anything I had ever heard, a lone female voice, somewhat lo-fi production, songs that encouraged me to, maybe for the first time, really think about music rather than just enjoy it and let it pass. The best part, for the romantic 13-year-old that I was, was that I had no idea who this woman was, what this band was, what this record meant to the world outside of my basement and how it sounded to those listening through something other than my father’s old beat-up massive speakers. This was well before the Internet. The truth was, I didn’t want to know.

Not very long after I acquired friends both older and much cooler than me, and one visit from them to my record collection unearthed the answer. “Liz Phair, dude. ‘Exile in Guyville.’ Matador.” And that was that. We probably then walked to the mall.

“Exile in Guyville,” arguably the most important indie-rock record to spawn from Chicago in the 1990s, not only was an eye-opening success crafted by a girl in a boys club, but also a sweaty, personal introduction to a songwriter who would wow us with such natural expression and talent only to break our hearts later in gross disappointment. The album sees its re-release this week, to celebrate its fifteenth anniversary, and Phair’s performing the material at a handful of shows, including one right here, where it all began. While it doesn’t feel exactly like she’s trying to cash in extraordinarily on past accomplishments—it’s not a full-blown tour, and it’s not like “Guyville” did Pearl Jam- or Nirvana-like business, not even close—it doesn’t feel completely sincere either, if only for the progressively decreasing value of her releases that followed. A sly move on her part to remind everyone what was so exciting about her in the first place, hopefully Phair feels she doesn’t have to do these shows, and that she actually wants to do them.

Truth is, I knew it was over as soon as I heard a snippet of “Explain It to Me,” which has always been my favorite song on the record, on MTV’s “Real World 4: London.” I still hadn’t discovered Phair’s identity, and I immediately felt offended that someone else had heard the record. And it was on television. From that moment on, it wasn’t just mine anymore.

While sophomore record “Whip-Smart” and her third, “Whitechocolatespaceegg,” had their moments, neither quite captured the raw bitterness, the passionate instability, of “Guyville.” Those records didn’t have “Dance of the Seven Veils,” “Canary,” “Divorce Song” or the stalling force of “Fuck and Run”’s repeated punchline: “I want a boyfriend.” Nothing could’ve prepared us for the monstrous return that was her self-titled 2003 release, her admitted bid for mainstream pop-princess popularity, which alienated her old fans and, sadly for her, didn’t grab her many new ones. The horror of absorbing Phair, who was once capable of using explicit sexual lyrics with such strength, who can make the suggestion “Maybe we can fuck and watch TV” so heartbreaking, turn lines like “Give me your hot white come,” was too much to bear. It was, perhaps immediately at that moment, over. (Even less memorable was 2005’s “Somebody’s Miracle,” an album I completely forgot came out at all.)

A former colleague of mine once labeled Phair the “blowjob queen of Wicker Park,” a moniker lewd enough to normally make me uncomfortable, but, since taken directly from “Guyville” track “Flower,” I understood the sentiment. Hearing that song again for the first time in years, I’m amazed that Phair can pull off lines like “Every time I see your face I get all wet between my legs” and “I want to fuck you like a dog” and seem genuine, not simply attempting to shock the boys and girls who were surrounding her at Rainbo. No one else could’ve done it then, and not even Phair could do it now.

Her sea of mangled guitar chords and vocal non-melodies receive a welcomed return. I’m happy just to have had to listen to the record a few more times, to remember just how good a piece like “Divorce Song” actually is, when she delivers a punch-drunk “It’s harder to be friends than lovers/And you shouldn’t try to mix the two/Cause if you do and you’re still unhappy/Then you know the problem is you.”