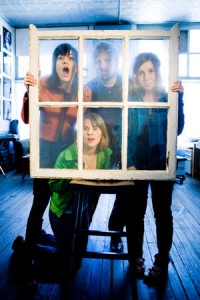 Local four-piece The Dials broke with a fury five years ago with their “Sick Times” EP, a garage-punk rock ‘n’ roll assault that reminded the world that not only can Chicago music still be fun, but you can get a lot of mileage out of a farfisa.

The all-female triple threat of Rebecca Crawford (vocals/bass), Patti Gran (vocals/guitar) and Emily Dennison (keyboards) matched with drummer Doug Meis and formed an intoxicating dance unit, every show, practically, an exercise session for the audience. If you didn’t move, that was your problem.

“Flex Time,” The Dials’ first full-length, released by Latest Flame, was recorded in 2004 and captured an even fuller sound, the more confident band more assured in embracing its influences and seemingly more dedicated to making you shake your ass. Devo meets The Go-Go’s meets Sleater-Kinney. Bubblegum, vocal harmonies and sex appeal. A much needed jolt of energetic inspiration.

Most know the rest. In July of 2005, just before “Flex Time” was to be released, drummer Meis, along with Crawford’s husband John Glick (of The Returnables) and Michael Dahlquist (of Silkworm), was killed in a horrific car crash. A tidal wave of grief rushed through the entire local music community as it struggled to comprehend such unimaginable loss. With great strength, the band decided to move on, with the help of drummer Chad Romanski.

“It wasn’t even an option for us at time,” Crawford says of the prospect of calling it quits after Meis’ death. “Everything was so turned upside down, and for me personally [the band] kept me going, us being able to continue. We knew that’s what Doug would’ve wanted us to do, it didn’t even enter our minds to quit.”

Romanski worked out immediately. “He just worked really hard,” Crawford says. “He had a tremendous amount of respect for Doug’s playing. He had no idea he was going to join the band permanently at first—he was just gonna help us out—but he quickly got addicted to us.”

After the release of “Flex Time,” when the band had time to begin working on new material, Crawford says the tragedy loomed overhead. “It was difficult to write happy songs for a while,” she says. “Darker songs came out of that, but I think that the four of us are a really huge support system for each other. It was a therapeutic thing to continue writing… We’re like a family, pretty much. I think that there is a tremendous [amount of support], and it made it easier for us to keep plugging away.”

The Dials’ excellent new record, “Amoeba Amore” (No Fun Records), not only builds on the band’s previous work, but across-the-board boasts the band’s best work, each song a fist, some of them featuring colossal crescendos of multiple vocal parts, thrilling moments that overwhelm with jarring conviction. “We definitely took our time with this one,” Crawford says. “We wanted to make sure it was done the way we wanted—there were some similar songs we had on ‘Flex Time,’ maybe some that had a darker edge or were more on the new-wave side. We talked to our engineer about that, we wanted to bring out the keyboards a lot, add some layers some more… We wanted it to sound bigger and louder.”

With dueling lead vocalists, the writing process may not be as streamlined as it normally is. “We’re really collaborative,” Crawford says of her writing relationship with Gran. “Patti and I work really well together. We’ll flesh out everything, write the foundation for a song, work out vocals, arrange everything. Then Chad and Emily will add their parts—we’re a really collaborative band. But it tends to work better when there are less elements going on at one time. When you’re able to hear everything more clearly. Generally, we learned that about ourselves in the last few years.”

Is writing the lyrics a collaborative process as well? “A lot of times that’s separate.” Crawford says. “Sometimes it’ll just be like, ‘What are you singing about? I’ll sing this, it goes with what you’re singing.’ If there’s a song where she or I have more of a lead, we’ll write the lyrics by ourselves.” Not to say they always know what the other is singing about. “Sometimes when we record, it’ll be like, ‘You’re singing that?!?!’” laughs Crawford. “‘I had no idea!’”

The album’s artwork features an amoeba-filled Petri dish, and two sets of tweezers set to place a rose and a little red heart inside. Thus, “Amoeba Amore.” Though it’s also the title of one of record’s better songs, I couldn’t help but ask where the hell it came from. “We were in the van,” Crawford says with a bit of sarcasm, “talking about amoebas—we have highly intellectual scientific conversations—and playing around with the double-meaning and the idea of self-reproduction. I think it might have been a time when the three of us were all single. And we thought we can still survive without, you know, our love lives being fulfilled. Amoeba love. It became a funny joke.”