As summer finally gets underway in the Windy City, Chicagoans will no doubt be gearing up for the full schedule of free events at Millennium Park. The unique structure in the heart of downtown Chicago is home to a vast array of performances, from the Grant Park Music Fest to the Chicago Human Rhythm Project. But one night that is quickly gathering momentum is the newly founded Audio Picnic.

“On Monday nights, they weren’t going to be using [Millennium Park] for the most part,” says Brian Keigher of the Department of Cultural Affairs. “And it’s such a beautiful sound system, we thought we might as well put something in there.”

Taking place on most Monday evenings, Audio Picnic offers a diverse selection of musical and audio talent that people can enjoy while relaxing on the main lawn.

Keigher continues, “Last week there were a lot of people picnicking, playing Frisbee and soccer out on the lawn, and it was pretty cool.”

This is the latest idea from Keigher, who was also the brains behind the Summer Dance DJ series (RIP), as well as the Chill Out Series at the Museum of Modern Ice earlier this year. Audio Picnic will take place through August and includes the AFTRA/SAG Players doing a live classic-radio-style performance, as well as a sound-art performance with Margaret Noble. The show on July 7, the last before a short hiatus, will have a downtempo instrumental focus with artists including The Opus and Ben Stroh, aka DJ Striz.

“It doesn’t happen too often when there’s a downtempo, instrumental, hip-hop-oriented event,” says Striz, a Chicago artist who has played with the likes of DJ Krush. “It’s cool that [the music] has a venue now.” This will be Striz’s second performance at Millennium Park. “I actually played at the Great Performers of Illinois Festival,” he explains. “I’m probably one of the few DJs that have played [Millennium Park] before, but it’s a rare treat to get to play outdoors in the city at all. Anytime we get to make that happen, I’m happy about it.” (Zeb Resman) 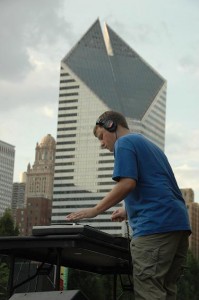