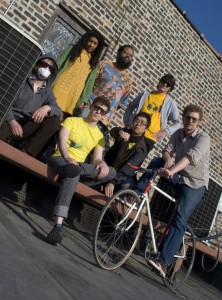 South Loop’s Shape Shoppe recording studio, run by musician Griffin Rodriguez (aka Blue Hawaii, of Bablicon), was shut down as a live-music venue last year when hundreds of Dan Deacon fans showed up for a secret show after details leaked on the Internet. Neighbors had had enough, the cops showed and that was that. Primarily a studio, however, a place for creation, the loft has continued to produce several projects from a unique collective of musicians who seem to involve themselves in each other’s projects so incestuously it’s difficult to keep straight. Some acts include Chandeliers, Killer Whales, Bird Names, Michael Columbia and, perhaps most challengingly, Icy Demons.

A psycho funk-jazz dance party warped together with a collection of keyboards, guitars, bass, energetic drums and elusive, sharply goofy vocals (the lyric “You better buy a breath mint with that last dime” makes an appearance), Icy Demons perplexes. “Unclassifiable” is a term often grunted in description. “Miami Ice,” Icy Demons’ latest record, which hits shelves July 15 courtesy of Obey Your Brain (a label run by a couple of the band’s members), a weirdo space record that encourages both dancing and drugged-out stillness, insanely enough, manages to stay somewhat accessible through all the chaos. A warm-weather album to be sure, “Miami Ice” is a collaborative project that certainly sounds like a team effort—the elements aren’t slung in your face, they’re dangled just over your head, out of reach, and the melding of such slippery sounds, quite a feat considering the number of layers here, continually mocks all boundaries.

“The band doesn’t necessarily have a specific sound we’re going for, whatever happens happens, and that’s what makes it interesting,” says Chris Kalis, a member of Ice Demons, along with Rodriguez and Man Man’s Chris Powell, among others. “I don’t think anyone’s thinking too hard, no one’s thinking about it too much. We’re just trying to have fun, to make music we want to listen to ourselves.”

Kalis says the public’s submission in terms of classifying the band may motivate it as a whole to continue on this path. “I was just thinking about that recently,” Kalis says. “It’s cool [we’re considered] unclassifiable. It’s not necessarily true…but I think it’s motivating. We were playing a house party in March, and someone told us that we were the first twenty-first-century band he’s ever heard. I thought that was cool.”

Kalis says the writing process begins in the studio with Rodriguez and Powell, who lay down the basic bass and drum tracks, the foundations for the songs, and then deliver those structures to the other musicians in the band. “I like [my parts] to be more textural,” Kalis says, “not adding too much on top but adding the right parts so that if it fits together with everything else it makes sense cohesively, it’s not a crazy guitar solo. Everyone approaches everything like it’s drums, whether it’s keys or drums or guitar, everyone’s got a percussive mindset. A lot of the songs have a syncopation to them.”

“Miami Ice,” Icy Demons’ third full-length, has a more structured approach than its predecessors, somewhat unbelievably, as sprawling and relaxed as it is. “I would say compared to those [records], this definitely has a more full feel, it feels like a record, a mostly pop-friendly record… It has a different flow, a better flow… I think that this is the first record where Griffin made it with the intention of the songs being played live, where the instruments he used could be played live. Not thinking about how it sounds on the record, but where it would fit into a whole set.”

“Miami Ice” features a slew of guest musicians on several songs, friends and local musicians invited to put their personal touches on already adventurous soundscapes, including upright bassist Josh Abrams, Emma Johanan, Heather McIntosh and guitar wizard Jeff Parker. “Usually, when you have someone like Jeff Parker coming in, you just ask, ‘What do you hear, Jeff? If you hear something, play it,’” says Kalis about working with guest artists in the studio. “He’s a professional, he comes in and plays, and it’s amazing. With all of our friends, the people stopping by the studio, the friends coming by—there’s an unspoken trust they’ll do something great.”