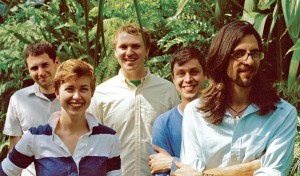 In 2006, when local five-piece Bound Stems dropped its debut full-length, “Appreciation Night,” many of us weren’t quite ready.

That record’s brilliance rested primarily in its jarring complexity—songs weren’t simply songs, they were canyons of sound overflowing with invention and surprise. Time signatures shifted erratically. The songs’ structures were wildly unpredictable, each was like three songs in one. Sound bites from around the city—conversations, the train, more—were embedded into the tracks, driving home the fact that this was a Chicago record and there shouldn’t be any confusion about that. I told everyone I knew I had just heard the best record of the year, forced my friends to pick it up themselves. First response? “It sounds like a big fucking mess.”

Yeah, but what a pretty mess it was.

“The Family Afloat,” Bound Stems’ second record on Flameshovel, set for vinyl release this week, works differently, more compactly. In nearly direct opposition to its sprawling predecessor, the ten-song album is just a lightning flash instead of the whole damn thunderstorm, and, while the group still crafts songs filled with unexpected left turns, each song, as catchy as the next, boasts a newfound confidence. The band’s showing off some chops that were previously hidden by over-the-top oddness and effects. At some moments, they even allow some comely vocal harmonies between vocalists Bobby Gallivan and Janie Porche. The lyrics, more personal this time around, resonate long after the record’s taken in. As much as “Appreciation Night” is a fantastic album, “The Family Afloat” is something else altogether, a pulsing, precise tribute to love, loss and family, an ode to the unique Midwestern experience.

Since listeners make a large deal out of the band’s insistence on shaking up the traditional song structure, I imagine it would start to feel like a necessity for the band. “I always feel the need to do that,” Sult says. “To me that was a fundamental starting point for Bound Stems. Not to be weird, but just to, measure by measure, be as interesting as possible. I think, at least in my mind, it’s funny to hear somebody talk about the left turns in the songs, because those parts seem more natural to me than a verse-chorus-verse-chorus structure… I really think it comes from the fact that we don’t have much interest in repeating something a lot of times. We have a lot of ideas.”

“The Family Afloat” doesn’t include the field recordings that were so essential on “Appreciation Night”—“We felt we covered the city pretty well,” Sult, who was responsible for those samples, says of their decision to not include them for this record—and, perhaps naturally, Gallivan’s lyrics became more personal in nature. Fascinated, he says, by the Catholic family, more the community than the actual religion itself (or the “culture,” as Sult interprets it), Gallivan writes about his own family experience, among other things.

“We were at a time in our lives where I felt like…I was really loving the people I was with, I was writing about them,” Gallivan says. “This is more about us than the last one, lyric-wise. It’s very American.” He mentions being inspired by literature, like the work of Raymond Carver. “I like that American feel of the lyrics,” he says.

Does the more personal nature of the lyrics make him feel more vulnerable? “There is one song,” Gallivan says, “‘Cloak of Blue Sky,’ and I couldn’t stand it, there is this one part where it just seemed so naked, because the words are super personal, and there weren’t effects on the vocals, they are very dry, and I couldn’t get over it. I told all this to Evan and he was like ‘No, no, it’s good, it’s good.’”

Part of what made “Appreciation Night” so powerful was that it, with the additional punches of sound from the city, was undoubtedly a Chicago record, and, while Gallivan still references the city in his lyrics, some of that is still lost in the field recordings’ absence. “I’m really happy people heard Chicago in that album,” Sult says. “I’m not sure how they could have missed it… But now I feel like the overt left turns, the weirdness, the Chicago stuff, those components have been folded in with the songs, the songs contain them. Last time they were spilled over the songs, and that was the intention, but this time the songs contain the material. ‘The Family Afloat’ is an album that has the confidence to be an album rather than a need to be an environment of its own.”