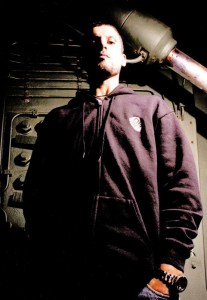 Influential electronic-music artist Cisco Ferreira has been associated with the very best of techno and electro for nearly twenty years. An iconic figure in the industry, Ferreira began his long career engineering tracks for legendary artists like Derrick May, Adonis and Mr. Fingers. He later went on to produce more than seventy releases as half of The Advent, a duo with Colin McBean. After the duo’s split in 2001, Ferreira continued to produce dozens of records and tour solo under the moniker. Ferreira has toured the entire world many times over, and has run the prolific techno label Kombination Research as well as his younger, more house-centric label Alpha Recordings. These days, Ferreira is as busy as ever, continuing to release records while performing DJ sets and Live P.A.s in several countries every week. Despite his busy schedule, he manages to spend plenty of time with his family in his current home base, Lisbon, Portugal.

He says, “It’s very hard when the weekends are long, but during the week I’m at home and in the studio, so I’m always around.”

With the exception of a DJ set at Zentra, Ferreira has not performed in Chicago since his mind-blowing live performance in Vision’s Sky Room three years ago. Ferreira explains, “The tempo has slowed down and I am using different ideas, and have been collaborating with new artists, so a lot has changed since I last played live.”

With weekly Friday-night techno events at Smart Bar becoming a thing of the past, The Advent live set has sent a wave of anticipation through the techno community. This long-overdue night is sure to draw technorati both old and new back to Smart Bar. Expect an expertly crafted performance full of funky, driving techno and futuristic electro breakbeats, infused with the sounds of Detroit, Birmingham and Chicago. Opening for The Advent is the Naughty Bad Fun Collective’s Antiphase, a DJ who continues to keep audiences guessing with his blend of tech-house, techno and electro. Also providing beats this evening is newcomer Bill Bishop. (Elly Rifkin)