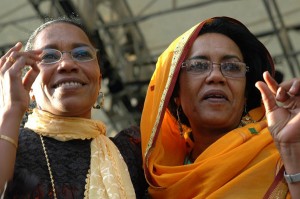 Good news out of Sudan? These days, that sounds like an oxymoron given the constant stories of persecution, violence and devastation that are reported on virtually a daily basis out of the region, but the Chicago premiere of the Sudanese Music and Dance Festival—which features an unprecedented roster of Sudanese musicians and performing artists appearing in a gesture of peace and hope for a unified Sudan—is hoping to reveal another side of the African nation.

“Whatever music at its best can make us feel,” says Los Angeles-based event organizer, musician, manager and producer Dawn Elder. “This music does that, and more. It will make you laugh, cry, dance—an entire range of emotions.”

What impresses Elder most about the musicians and performers that she is taking to Chicago and Detroit, two Midwest towns with huge populations of Sudanese refugees, is their fortitude and optimism.

“They have been through everything,” says Elder. “Imagine being a master of your art, but the government would imprison you just for performing. You couldn’t even play for weddings because you would be breaking the law. These are masters of their craft who have no opportunity to perform or practice.”

At issue are the fundamentalist Muslims in charge of the country which, much like the notorious Taliban in Afghanistan, are mandating that since music arouses extreme passions in people, it must only be reserved for prayer and prayer alone. “It’s not a Muslim thing,” Elder says, “since many of these performers are Muslim as well. It’s an extremist thing, which is something you can find in any religion.”

Indeed, Elder is quick to point out that many musicians have been as persecuted by Christian missionaries in the South who forced them to change their tribal names to “Christian” names “you know, apostolic names like John, Mark,” and of course, Christianity for centuries had a similar view of music which can still be found, even today, within some Christian groups right here in America.

“It really has become a class issue,” says Elder. “If you are a Muslim, speaking Arabic and are from a certain region of Sudan, you are entitled to certain privileges. People think that this is only happening in Darfur, but it’s throughout the country. There is a select elitism to control the money, the agriculture, the jobs. You have all of these very well-educated people from, say, Khartoum, that were all of a sudden out of a job because they were not playing by the rules.

“We’ve given exposure to the crisis in Darfur, but the musicians want to give exposure to what is happening across the rest of the country as well. They want their country, a real country, a real democratic nation where everyone is equal and has freedom and justice and the same rights for everyone rather than an extreme interpretation of the Quran imposed upon everyone by a select few.”

Elder’s own interest in the music of Sudan came about a decade ago. “There was a point in the early nineties where I felt that music wasn’t really going anywhere and I became fascinated with music coming out of Africa and in 1997 I put together the first international Friendship Festival which put artists together from around the world.”

Participants included Arabic singer Sabah, “the premier diva of the Middle East,” and Sudanese singer Mohammed Wardi, considered the father of Nubian music. “I realized that there was a tremendous wealth of musical sounds from Sudan that nobody knew about that wasn’t being openly played or heard and the musicians began telling me their stories. When Mohammed Wardi came here, he had been imprisoned three times and his kidneys had failed, and the government had destroyed the recording masters of his work, so we began to record him here to preserve his music.”

The lineup for the current Sudanese Music and Dance Festival includes singer and bandleader Abdel Gadir Salim, an artist from the western desert region who has adapted many traditional Sudanese folk melodies to the oud, the Middle Eastern lute. Abu Araki El Bakheit hails from the Al-Jazira province and became an important recording star and continues to perform for communities of the Sudanese Diaspora across the world. Representing Darfur is Omer Ihsas, who leads an ensemble of musicians and dancers celebrating traditional Sudanese culture. Al Balabil, a Nubian trio of sisters, has been dubbed “Khartoum’s answer to The Supremes,” and although they stopped singing together after devoting themselves to their family lives, they are reuniting for this appearance for the first time in over two decades. Cairo-based composer, producer and arranger Yousif El Mosley joins the roster as well, all performing with the Nile Music Orchestra of Sudan.


“The joy for these artists to be able to perform in public is overwhelming,” Elder says, “and makes the constant visas and roadblocks as we assemble them that are aging me fast, so worthwhile. They would probably play all night if they could, but the entire show will last two hours, with artists performing separately but uniting at the beginning and at the end of the concert in a show of Sudanese unity in hope for a better future. The government’s biggest weapon has been to emphasize differences among the people to divide them, but on freedom and equality for all, there is unity.”

The Sudanese Music and Dance Festival takes place at 6:30pm July 10 at Millennium Park’s Pritzker Pavilion at Columbus and Randolph, as part of the city’s free “Music Without Borders” series. Free.