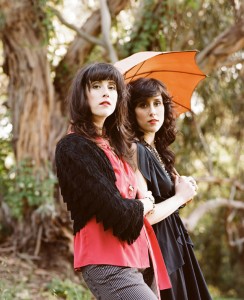 Twins always seem to have an unshakable hold on the world at large. Whether they’re fake (Hayley Mills), mega-millionaires (Mary-Kate and Ashley Olsen) or hair-metal band has-beens (Nelson), mirror-image pairs strike an endlessly fascinating chord. Maybe deep down inside we all long for a bosom buddy to share a secret language with?

In lieu of an altered, raggle-taggle version of Pig Latin, the only language passed between the Watson Twins is of the musical variety. Los Angeles-based by way of Kentucky, Chandra and Leigh Watson first garnered acclaim by fulfilling back-up duties on Jenny Lewis’ first solo outing, “Rabbit Fur Coat” (Team Love), and the subsequent tour, which took the sisters and the Rilo Kiley frontwoman all over the world.

Glowing harmonies aside, it’s hard not to notice the raven-haired lookers standing at about a height of six feet. Upon returning from the whirlwind Lewis jaunt, the Watson Twins stepped out from behind and into the spotlight to release an EP entitled “Southern Manners,” highlighting their easygoing style—as comfortable and familiar as sitting on the front porch catching fireflies. Now, the twins bare even more of their entwined souls on “Fire Songs” (Vanguard).

Comprised of five Chandra-penned tracks, five Leigh-penned tracks and one cover of The Cure’s “Just Like Heaven,” the album wears its heart on its sleeve. Speaking on the phone from home in LA where the fashionista is trying to figure out exactly what to bring on tour and how much room new purchases will warrant (“You have to leave the proper amount of space for all those epic vintage stores you pass along the way,” she says), Leigh Watson swears they didn’t divvy up the songs evenly on purpose.

“Honestly, it was just one of those things. These songs just spoke to both of us so it ended up being five and five, but I think subliminally, when you’re a twin and you grow up your whole life having to split a cookie exactly down the middle and making sure that one person…,” Leigh says trailing off. “My mom was always so good…everything we had to split—a candy bar, a cookie, a slice of pizza—it was exactly split right down the middle. There was no favoritism. Maybe subliminally we charged back to that place in time.”

She also notes the difference between playing the role of the hired hand and facing the crowd alone.

“As a back-up singer you kind of allow yourself more liberty to have a good time and enjoy the experience. When you’re the frontperson…it’s a little bit more pressure,” Leigh explains. “We feel excited too, to feel like we’re sharing a piece of us. People are familiar with the way we sing together, but not necessarily our songwriting style. It’s our first full-length and we are really excited about it, but we’re also anticipating people’s response and just hoping people can feel a connection to the songs.”

Enlisting the help of Chandra’s hubby Russell Pollard and J. Soda of Everest in the studio, the twins pared down forty songs into a recordable seventeen, but Leigh had to twist a few arms to get “Just Like Heaven” included.

Hearing The Cure hit on a Top 100 radio countdown while on a visit home in Kentucky, Leigh mindlessly fiddled with the tune on her guitar, with Chandra pulling out the harmonica as the two easily fell into a laconic rendition.

“We told J. and Russ…we want to do a cover of ‘Just Like Heaven’ and they were like ‘Are you serious?’ And the funny thing is J. knew the guitar lick already. I was like, ‘Dude, c’mon.’ He was like, ‘It’s the first song I learned on guitar,'” Leigh recalls, mimicking the gruff voice guys use when they’re trying to dispute a fact.

No word yet on whether Robert Smith has heard the twins’ take on the song, but Leigh looks forward to his reaction. “I’m waiting for my box of chocolates…or maybe like a bouquet of black roses,” she jokes.