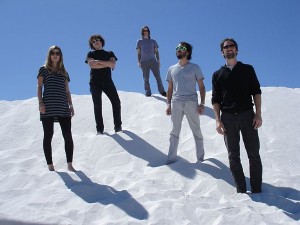 Either you’re a fest person or you’re not, rarely does anyone fall comfortably into pure indifference, and if there was anything to drive the undecided to the negative side at last weekend’s Pitchfork Music Festival it was the weather.

Not Pitchfork’s fault of course, and temperatures have been high in each of the festival’s years, but with the humid gloominess of Friday, Saturday’s steady rain (which turned into a sun-drenched mudslide) and Sunday’s abusive heat, it was enough to make you long for the summers when you could see these bands indoors in small clubs. The allure of these events is as always to see the impressive number of acts in one place, and this weekend did offer some memorable sets, and more often than not, from the veterans. Friday’s “Don’t Look Back” series offered a fantastic, loud set from Mission of Burma as the band plowed through “Vs.” The same night, Sebadoh’s sloppy indie-rock managed well through the first half of “Bubble and Scrape” only to grow tired along the way, and Public Enemy, performing “It Takes a Nation of Millions to Hold Us Back,” sounded solid (at least Chuck D did), but was hamstrung by Flavor Flav’s tardiness (seriously, he missed “Bring the Noise”? Chuck D couldn’t believe it either) and his onstage pumping of his reality-TV status, which solemnly (unintentionally, to be sure) reminded the crowd of Flavor’s depressing decline.

Saturday, fighting the rain, Caribou’s two-drummer assault through high-energy, melodic, Beach Boys-inspired electronic mayhem was a highlight of the festival, though scheduled a bit too early for everyone to see it. Jay Reatard was, as expected, pretty boring, as !!! succeeded in discovering a new level of ungodly annoyance. Fleet Foxes, with all the relaxed, hushed sounds and complicated vocal melodies and harmonies, kept the crowd transfixed for all of its set, but Vampire Weekend, drawing in what seemed to be the biggest crowd of the day, sounded a little thin and, though it picked up at the end with a string of the better songs from the band’s record. The Hold Steady, a lot of beer-soaked fun as usual, stole the later-in-the-evening segment from Jarvis Cocker and Animal Collective.

Sunday proved better, as Japanese metal band Boris got started early and tore everyone’s face off. Weirdo electronic outfit HEALTH was equally convincing with its energetic yet strangely hypnotizing hums, and nineties alt-rock pop band The Apples in Stereo did a fine job of delivering its sunny-day tunes in the midday heat. The best part of the whole festival was the back-to-back punch of the gloriously epic and at-times frightening Spiritualized and the straightforward rock of Dinosaur Jr., the three-piece backdropped by a wall of Marshall stacks, J. Mascis shredding as he did twenty years ago. The extensive lateness of Cut Copy caused a lot of fans to bail and head over to see Spoon; unfortunate, as the indie-rock stars were rather dull this time around.

Bridging the gap between Pitchfork and Lollapalooza in two weeks is this weekend’s Wicker Park Fest, which in its fifth year offers a solid two-day lineup of indie acts (and the traditional street-fair amenities, food, drink, shit for kids). Highlights on Saturday include sets from the Scotland Yard Gospel Choir offshoot Brighton, MA (3:30pm), a band that, with only one EP, has made a splash locally with its nostalgic, sometimes Dylanesque rock. Local favorites The 1900s follow at 4:35pm, then the elegant, violin-tinged rock from New Yorkers Ra Ra Riot (6:45pm). Tim Kinsella’s Joan of Arc follows at 7:55pm (the band’s also playing Beat Kitchen on Sunday night), and the evening ends with a set from Chapel Hill noise-rock legends Polvo.

Every festival has its own role, Pitchfork being the destination for underground-rock fans and Lollapalooza the destination for pretty much everyone else, which ultimately hurts it. During the mud-bowl portion of Saturday’s events, a group of ten or fifteen kids slopped around carefree, completely covering themselves in the dark brown goo, and if you need a reason for any of these multi-day marathons, that was it. The only part of their bodies not obscured were their teeth, exposed by gleefully youthful, uninhibited smiles.