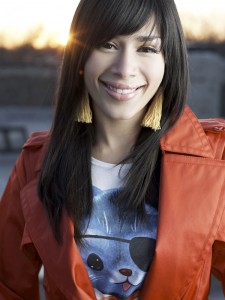 When I call Melissa Young, aka Kid Sister, at her Albany Park home at 10am, I’m afraid I woke her up.

“No, no, I’m already awake,” she says with the expected grogginess of someone who was definitely not already awake. “I’m going to the pool. I’ve [almost] finished all of my record, and this is my present. I get to go to the pool. I haven’t been in a bathing suit all summer long. So, YAY!”

She seems up now.

The record she’s talking about, her debut full-length, titled “Dream Date,” is currently set to drop this fall on Downtown Records. Kid Sister got her start of course as the MC of local DJ duo Flosstradamus (Josh “J2K” Young is her brother) and with her “Pro Nails” single, the video to which featured an appearance by one Kanye West. With only a minute amount of material actually released, the buzz around this potential new queen of hip-hop is so overwhelming that when her mug graced the cover of URB this summer the immediate gut reaction was “Yeah, that makes a lot of sense,” and not “Wait, she doesn’t even have a record yet!” She’s even been nominated for BET award. Needless to say, the album will arrive amidst a wave of expectations, and it’s a record from a Chicago artist as well, a city that’s recently set the bar so highly for hip-hop. For now, she’s planning a trip to Miami to finish up one last track for the album, with Pharrell Williams.

“I’m recording with Pharrell,” she says. “That is what dreams are made of. Pharrell fucking Williams. I mean, listen to his songs.”

At this point, though, she’s relieved there’s light at the end of the tunnel. “Hell yeah, I feel like I’m a senior in college again,” she laughs. “You know how it feels, like when you’re a sophomore, how ‘I’m never gonna be done,’ you just changed your major, ‘I’ll be here forever’—that’s how I felt six months ago. ‘Am I ever gonna be done with this thing?’ But then it was, ‘OK, get over yourself, keep working. You will eventually be done with this, it’s just a matter of getting over that hump.’”

“Dream Date”’s original title, its working title for a long time, was “Koko B. Ware,” in reference to the old-school WWF wrestler. I was tremendously disappointed when I learned the title had been changed. “The WWF wouldn’t let us use that,” she says, sadly. “They were like, ‘That’s gonna be…let me check my records…ONE MILLION DOLLARS.’ And I was like, ‘I’m sorry, I don’t seem to have that in my savings.’ Koko and his people thought it was really cool though, so thanks to Koko B. Ware. But all of the good will of the world can’t get me what I want. Do what you can with what you got. That’s pretty much the theme for the record.”

Her unexpected success even caught her by surprise. “I’m so so grateful for it,” she says. “I would be lying if I said it wasn’t weird—after being so poor for so long, struggling for so long, I feel kinda like Sally Field. ‘You like me! You really like me!’ It’s a surprise. I don’t have an album out, I have five songs out, a handful of edits, remix things, and I got nominated for a BET award. I would never have ever even dreamed of that. It’s like, that can happen? Wow, I’m going to LA now, to the Shrine Theater. When you work at a children’s-clothing store in Roscoe Village, it’s not really training for that. It’s an out-of-this-world experience.”

Kid Sister grew up at 76th and Cottage Grove, and her Chicago roots allow her to embrace the city’s little-big-town mentality. “You know how Chicago is, it’s so laid back,” she says. “I just feel like Chicago’s a no-pressure place, that’s why I love it here. I mean, everyone moved. Common moved. Kanye moved. But I love it here because it’s so laid back. I’m a bit of a spaz. I’m a little neurotic. I’m really anal, a perfectionist, so being in the biggest city would make me crazy. That’s why I like it here. Just go with the flow, man. Relax.”

She admits that the recent success of Chicago-bred hip-hop stars has paved the way for artists like her and those to come in the future. “It’s very easy for me to remember a time when you could be a Chicago rapper and that’s all it was. Nothing was gonna happen,” she says. “Now there is this distinct possibility you might be paid attention to, considered. [Coming from Chicago] I think means you actually have a chance.”

Though she can’t divulge any details, she says there could be a reality show, with her in the lead, in the future, and of course, there’s this weekend’s set at Lollapalooza. “Hell yeah, I’m super excited,” she says. “This show is just gonna be so much more than what we’ve done in the past. We’re trying to make it meatier. I’m pretty excited about it. I mean, the AT&T stage? Who plays there? Not me…”