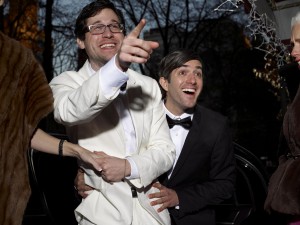 You can’t read a piece about Brooklyn’s We Are Scientists without the writer mentioning the band’s sense of humor.

Not in the music, however, but in just about everything else; here’s a band so comfortable with what its trying to achieve that it seems eager, anxious even, to not take itself too seriously. Case in point: the band’s press release that accompanied its second record, “Brain Thrust Mastery,” which was released back in May, tells us journo chimps that after touring for their first effort, “With Love & Squalor,” the band spent 2007 “at weight-loss camps, alcoholics’ dry-out facilities and a race car school.” Later the bio tells us the band’s funded by $1.4 million in lottery winnings. At the We Are Scientists Web site, the band offers an “advice” page on which it provides thoughtful insights on questions such as “What is the difference between a muffin and a cupcake?” and “How can you understand poetry?” Easy and goofy, sure, but a nice reminder that this business can be fun, too.

“Brain Thrust Mastery,” released on Astralwerks here in the States, a suitable follow-up to the attention-grabbing “With Love & Squalor” debut, embraced the band’s relatively straightforward pop; it’s a major-label release, without question, as the hooks and catchy vocal weaving are fine-tuned into a blinding glisten. The eighties-pop influences are still present—“Lethal Enforcer” could be mistaken as a Duran Duran song—as the liberally painted reverb give the record an elemental retro sweetness. Funny thing is, the music doesn’t mirror the band’s humorous antics—no joke, We Are Scientists, with its music, is as heartfelt as it comes. Single “After Hours,” a refreshingly pure and simple radio pop song, features an intoxicating vocal melody and propelling, incessant guitar lead, and when singer and guitarist Keith Murray howls the “Say that you’ll stay” refrain, you believe you’ve heard an anthem. “Brain Thrust Mastery” didn’t do a hell of a lot for me personally when I first listened back in May, but I was recently driving home one late night and I heard this song on the radio; I was strangely, unexpectedly moved by it.

“It’s still self-reflective,” Murray says about his lyrics for the new record, “but I’m more…digesting things. It’s not 100 percent first-person accounts. Part of it is that after playing the songs [from the first album] that are essentially me whining about me for two and a half years, I’m more than a little bored by me. I also think that being on tour for that long, enduring relative isolation…it made me more hyper-aware of the value of long-term friends of mine. I started becoming more and more interested in other people.”

When We Are Scientists recorded “With Love & Squalor,” it was primarily a live band, so it recorded an album that reflected that sound, a stripped-down, basic-element record that could be easily transferred from tape to stage. When it came around to make a second disc, the band knew it wanted to push the limits a bit more, make a bigger record with a larger scope. “[This time] we were hyper-sensitive to the fact that what we were writing this time was an album,” Murray says. “Last time we got a lot of criticism, that a lot of the songs sounded fairly similar and they all sounded like we were trying to write singles. This time, we were more interested in making a full album…which is maybe a naïve idea in this day and age, because nobody listens to albums anymore.”

For a variety of reasons, including mainstream American tastes and separate marketing plans, We Are Scientists is notably more successful in the UK, a single-charting radio band that’s had a sold-out tour. “I think [with] Astralwerks,” Murray says, “by virtue of having smaller intentions with the product, the motives are generally a little more discreet. It feels less like we’re being forced down throats.”

And then there’s the humor. “It’s not something we do in a calculated way,” Murray says. “We don’t feel like we’re clowns, I think we’re just fairly wry people in general. We have a hard time discussing something as stupid as being a musician with the reverence of, say, Bono does. Those things come through especially if you interview us both together [he and bandmate Chris Cain], the idea of us behaving as if the things we are doing are of the most profound caliber. It isn’t us being self-deprecating…it’s just that doing it is utterly ridiculous.”