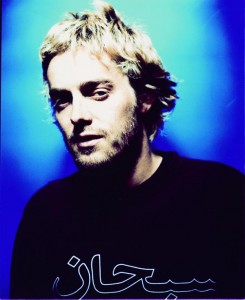 And there he was, the superstar DJ standing before thousands of tent moppets dancing in the mid-day heat, mashing up Daft Punk’s “Aerodynamic” with a Speak & Spell’s disembodied voice spelling out “O-B-A-M-A. You are correct.” As the kids danced harder, one obvious question would be why a British DJ would be so interested in the potential future President of the United States. Course, it makes a bit more sense when said DJ is Adam Freeland, who absconded to sunny Los Angeles about eighteen months ago. So what prompted this move?

“A girl,” he sheepishly laughs into his phone as he cruises to LAX en route to weekend gigs in Austria, England and Portugal. Although his love-relocation might not have worked out in the end, Freeland decided to stick around. “I wasn’t expecting to like LA as much… [but] 360 days of sunshine a year is enough to win over an Englishman who’s used to rain and miserable-ness!”

It would be easy to paint Freeland’s apparent support of Barack Obama as simply playing to the festival masses, but there’s one element persistent throughout Freeland’s musical career that will sound familiar to anyone following the senator’s presidential campaign: change. Freeland’s meteoric rise to the jet-setting musical elite began with the successes of his “Coastal Breaks” mixes, leading to 1998’s “Tectonics,” which made Freeland the poster boy for nu skool breaks. But by the time it came for Freeland’s artist-album debut, it became apparent that instrumental dance tracks like those featured on his previous breakbeat mixes were not the next step in his career. 2003’s “Now and Them” (as Freeland) garnered big attention for its punkish attitude and breakout single “We Want Your Soul.” Since then, Freeland has become more visible remixing tracks from the likes of Silversun Pickups, Shiny Toy Guns and Marilyn Manson than relying on his former breakbeat persona. And following the release of his “Hate” EP (released December 2007), one wonders exactly how much of Los Angeles’ rock-to-electro scene has influenced his sound. The world will find out soon, as Freeland has been hard at work at his next artist LP.

“I’d say this album I just finished is definitely influenced by being in LA, just because the musicians I’ve worked with I couldn’t access from being anywhere else in the world. The [“Hate” EP] was actually just instrumental cuts that didn’t make the album. The album’s more song-based… [but] that EP is more influenced by the current Parisian sound than it is LA.”

Those Parisian influences could be seen taking hold in Freeland’s contribution to the venerable Global Underground mix series, with 2007’s “Mexico” installment featuring remixes and productions from Etienne De Crecy, Mr. Oizo and Justice. “To me a lot of the Ed Banger stuff is the attitude that kind of got me excited about early days of breaks, y’know, before it kind of, long voyage, went very generic,” Freeland explains. “I’ve always said I’m a rocker trapped in a DJ’s body, and… things come and go… [The French tracks] got that sort of fuck-off rock [and] punk-rock attitude to it. It’s not about tasteful minimal high hats—and it’s still tasteful, don’t get me wrong—but it’s maximal… I can’t play a whole set of that stuff, but I like it.”

“I can’t play a whole set of that stuff, but I like it” might be the only accurate description for Freeland’s evolving sets. Despite his ribbing on “tasteful minimal high hats,” his mixes often contain a few techno-leaning tracks, and he even had Brazilian techno visionary Gui Boratto remix 2007’s “Silverlake Pills.”

“The fundamental kind of glue that keeps it all consistent for me is my love of snare drums. I’ve always loved house music but, it’s like, I couldn’t ever stand the straight 4/4 kick drum… I look at producers like Todd Terry or LTJ Bukem, for example, and they’re people who’ve just got one sound and ran with it. That’s their sound,” he explains in reverence—before candidly admitting his own limitations. “My personality type couldn’t do that. I tire to quickly… I need to be constantly inspired by new stuff, and that obviously influences what I do… I sometimes see if I’d just taken one sound [and] really honed it in exactly and just totally [ran] with that, it would be a way bigger thing, but it’s just not me… I can’t do that!” he chuckles. Even Freeland’s speech pattern reflects this rapid-fire attitude, as he leaves sentence fragments hanging when a new idea bubbles forth. Like, for example, his new album that he’s hoping to release early next year.

“I literally finished it today… I’m really happy with it—it’s definitely my biggest, most ambitious project to date. I took almost three years making it, so I’m pretty keen to get it out there.”

Freeland’s admitted love of shoegazer, drone-rock, snare drums and rock sneers will be on full display, with contributors including Twiggy Ramirez of Marilyn Manson fame, punk hellcat Brody from the Distillers, Gary from Devo, and most surprisingly, Joey Santiago of the Pixies.