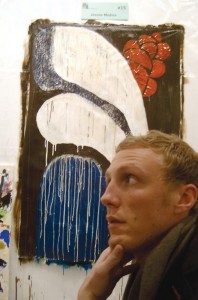 Deep is the operative word for Josh Muthart, aka Josh Deep. He releases spiritual dance music by the likes of Alton Miller and Chicago percussionist Kahil El’Zabar through his label, Deeper Soul Recordings.
As co-owner and record buyer of the recently shuttered Threshold Records, Muthart was expert of grooves new and old, hipping the public to tunes that may have otherwise gone unheard in southwest suburban Tinley Park.

But it is Muthart’s work as a DJ that drives him most at this moment. After throwing a handful of one-offs as the Disco Unusual Club, including a barnburner earlier this year at Danny’s Tavern, Muthart newest venture is Disco 3000—an event that aims to highlight disco’s past, present and future. The focus is deep cuts, with a lot of funky percussion and heavy basslines, but not a lot of cheesy strings.

Muthart has toured as a keyboard player with El’Zabar’s Ethnic Heritage Ensemble, sharing the stage with Afrobeat legend Tony Allen and jazz icon Archie Shepp. He has also DJed alongside Greyboy and DJ Harvey. For the Disco 3000 party, Muthart will be using an original Bozak mixer, the brand favored by DJing pioneers Nick Siano and the late Larry Levan.

“This party is about going back to my roots,” Muthart, 33, says.

Here are some of Muthart’s favorite records:

Cat Stevens, “Was Dog a Donut (Disco Version),” A&M Records, 1977
A remix of an instrumental off Steven’s album, Izitso. “It’s a slower track,” Muthart says. “I always lace down some shit like this early. The heads who know this will know you know what’s up.”

Fresh Band, “Come Back Lover,” Are’N Be Records, 1984
“This was a big Jersey record,” Muthart says. “[Tony Humphries’] mix is what made this record.”

Logg, “I Know You Will,” Salsoul Records, 1981
First song of this album composed by Leroy Burgess, of Black Ivory and Universal Robot Band fame. “I could play four songs off of this record. How many disco records can you say that about? Boogie would not exist without [Burgess]. He should be so much more respected and heralded. He did so much with so many different things.”

Lamont Dozier, “Back to My Roots,” Warner Brothers, 1977
Solo effort by member of the Motown hit-making team Holland-Dozier-Holland. “These guys weren’t trying to make disco. They were trying to make contemporary R&B. The story he tells is incredible, and the collaboration with Hugh Masekela—this song is just a masterpiece. This song means something to me.”

Ramona Brooks, “I Don’t Want You Back,” Q Records, 1980
“A boogie classic. One of the many records I purchased at Kstarke Records on Western [Avenue].”

Viola Wills, “These Things Happen,” Wide Angel, 1987
“A deep house, jacker classic. When I was 15, I went to Medusa’s and started sneaking out to loft parties on Milwaukee Avenue. Derrick Carter, Mark Farina, Spencer Kinsey—they were playing newer house, disco. There was no air conditioning. You are brought a towel to clean yourself off. One foot on the ground, one foot in the air—jackin’. That’s what this record reminds me of.”

Unknown artist, “Crack Steppin’ (Josh Deep Edit),” 2008
Muthart re-edited this private-press 1970s tune out of Detroit. “It needed to be edited for the dance floor. It was too short. There needed to be enough parts for people to let the groove grow on them. The beat is almost broken-beat to me, so I just sped it up and looped it. I roller skate, and there’s a bunch of vocals about rolling skating in it.”