The new Jazz Showcase is located in Dearborn Station at 806 South Plymouth Court. In June, the club’s infamous poster of Charlie Parker still laid on stage, surrounded by tools, before the opening night.

Wayne Segal, co-owner of the Jazz Showcase with his father Joe Segal, talks about the club’s re-opening. “You open up with expectations, your adrenaline is running, and down to the last minute…the picture is not up. The witching hour comes…it all falls into place.”

Segal long envisioned a space, fueled by “passion for music and life itself. I would go to different places and say ‘That feels great, that looks good’ or ‘The room needs to have this color.’” His creation is born “from a blank canvas.”

He designed it so that people would stay a while, lounge, listen to music and have a drink or two. “I wanted a place unlike all of our others. They were very special, but had a formal feel. People would come to hear concerts, get up and leave. I would say, ‘Hey, I have a bar over here—hang out.’” Less formal, it offers the comfort of love seats tucked into corners. “I wanted to create a living-room space where people relax. Someone walked in here last night and said, ‘This feels like someone’s living room.’”

The club’s vibe reaches others. They are collaborating with new neighbors, like the Chicago Multi-Cultural Dance Center, who once occupied the space. A compatriot in the arts, Segal offered them use of the space, free of charge. “They were really thrilled about that. It is just being part of the community.”

Partnerships also include local colleges and universities “who are willing to work out nights when their big bands play.” Though the venue is famous for its “straight-ahead Bebop,” they will be a part of the World Music Festival this September. “We’re going to bring musicians from around the world, through the Chicago Cultural Center.”

Segal expects a lot of action, but says it is nothing new. “We’ve always had jam sessions, but on a higher caliber of musicianship, which really doesn’t lessen the talents of Chicago-based musicians.” Times have changed and impromptu “real jam sessions” have faded out. Yet, the Jazz Showcase is recreating them with local musicians. “They’re better than many of the other musicians or just as good. We have deep relationships locally and internationally, so nothing has really changed.”

Segal runs a passion-driven business. He pulls out chairs near a high cocktail table, only to get up and turn on the sound system. Horns blow in the background as he talks about the music. “I don’t care if the band plays in Calcutta, it would still be great. When I say the music holds its own, I think back to clubs that we’ve had with holes in the walls, and it would be just as wonderful as if it were in this wonderful room.”

The passion for the music is why father and son are still in business. “If we were true businessmen, we would not have lasted this long because the bottom line isn’t there.” For Wayne and Joe Segal “the top, the middle and the bottom are music.” They have sacrificed funds and more to “stay true to heart.”

Close to the heart of the club is the “prominent” image of Charlie Parker—the “god.” The poster had been in storage and got water damage. Throughout the years and many moves, it suffered wear and tear. The eyes are retouched, now hauntingly youthful. Watching over everyone and everything, Charlie Parker has been with them since before 1947. He recalls his father saying when “Bebop first came on the scene” and “everybody was talking about this weird music. My father thought he was playing backwards…and then it hit…like God opened up the gates and said ‘Come on to heaven.’ It was the ‘new sound’…the birth of Bebop…an unbelievable time.”

Bird flies high on the stage of the Showcase. August 29 is Parker’s birthday, and his sacred sounds play annually throughout the whole month. “He is here to stay. We would not be who we are without Bird being up there on the wall. Everyone comes in and expects to see Charlie Parker on the wall. He’s the man.”

Bird keeps going, but for the Segals, Dearborn Station is their last stop. Many thought it was over on New Year’s Eve in 2006, but they are back and taking the business where they want. “Last stop to me does not mean the end of anything. It just means the journey of it all. Where it ends? I don’t know where it ends. Where it stops? What does ‘stop’ mean?”

This may be “the last Jazz Showcase” that will then live on in “archival history,” but what matters now is the unnoticeable passing of time. “I never realized this much time has gone by in my life. I wouldn’t call it a fleeting of time, but movement.” 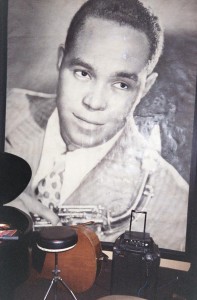