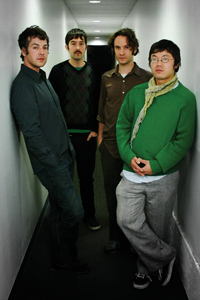 A strange mutant strain of virulent disco, krautrock and rocktronic rhythms has been spreading from San Francisco, as instrumental genre-bender Tussle pushes its unique percussive sound. Tussle is touring behind its recently released third album, “Cream Cuts.” One of the founding members and self-described “knob twiddler” Nathan Burazer took time out during his lunch to talk about the new album and Tussle’s upcoming set as part of the five-day Adventures in Modern Music showcase.

“The past reactions to the first two albums—we were very happy with them—but a lot of the reactions were like ‘Oh, it sounds like ESG or sounds like Can.’ It wasn’t something that we intended to do… they are influential on us, definitely, but I think this time we decided to do something really different,” he explains, citing newer influences like Gang Gang Dance and Justice. Despite the newer influences, fans of their previous albums will definitely still recognize the propulsive drumming, psych-influenced atmospheres and synth stabs that have won the quartet fans in Trevor Jackson, Adult. and Prefuse 73.

The band’s unique sound is tied to Burazer’s earlier years spent jamming with bandmate Jonathan Holland in its previous home in North Carolina. “We didn’t have a TV or video games, we would just have this one room were we would hang out and our friends would come over and we would just jam for hours and hours, not with any intention of making a song or recording or anything, it was just kind of for the fun and enjoyment of being with each other and the music,” Burazer recalls. “There [were] homemade drums and buckets and pieces of scrap metal and stuff like that.”

Upon relocating to San Francisco around 2000, the duo kept on jamming, adding a bass player and second drummer to join Burazer’s electronics and Holland’s unique junkyard percussion. The foursome continued to play purely for fun until they participated in Rock Out San Francisco, in which bands got up to play outside at noon, all over the city. “People came over and were listening and digging it… that was one point where we were like, ‘Maybe we should try to structure this and put together a demo or something.’”

Tussle brought its live sound into the studio, initially trying to replicate its jam sessions, but refining the process over time, recording its practice sessions and using a computer to quilt together usable patches of audio into a rough outline to recording. A handful of releases and two full albums would follow leading up to “Cream Cuts.” Despite sporting a new look with lineup changes including Tomonori Yasuda (bass/electronics) and drummer Warren Huegel, a more experienced band has Tussle expanding into new territory. Where before Tussle depended on using broken and found instruments, it now has the experience and hardware to make the most of its recordings. “We still use those elements—but with better equipment,” explains Burazer.

Another element added to the mix is “Cream Cuts” producer Thom Monahan, best known for his work with Joanna Newsom, Silver Jews and Devendra Banhart—a diverse and talented bunch, but Monahan might not initially seem like an obvious choice for the band’s heady instrumental workouts. But Monahan has worked with the band before, mixing its breakout 2004 club sensation “Disco D’Oro.”

Burazer admits that it was weird to put faith in another person, but Monahan’s experimental approach suited the record just fine. “Thom was a lot more experimental with willing to go and try out different ideas he knew we were curious about, so that was really fun… being able to take risks and branch out and stuff.”

The band’s experimental approach to the studio manifests live in a mean rhythm machine of a setup featuring “a mess of drums in the middle,” as both drummers face each other—even sharing, most notably, a kick drum. A table of electronics flanks the beat-melded drummers, with bass player Tomo off to the side with, yes, more electronics in synthesizers. “It’s a funny thing. We use electronics, and we have a lot of drums, and I think that is the main thing that makes people want to dance.”

Mahjongg, Gang Gang Dance, and even !!! are viewed by the band as contemporaries, with similar infusions of rock and dance being the most obvious shared trait. Burazer credits Tussle’s new drummer Huegel for adding his experience and rock background into the band, where it melds with fellow percussionist Holland’s love of hip-hop, Tomo’s love affair with “pretty rock” and experimental electronics and Burazer’s own love of early Warp records. “We’re just trying to make music that we like and have faith in our own interests that the music is something that other people will enjoy in some way.”

As their tour unfolds, Tussle will release remixes of genius pretty-song-gone-wonky “Night of the Hunters” from “Cream Cuts,” with fitting retreads from Norway’s psych-melodic disco don Prins Thomas and Rory Phillips of Trash UK fame. With remixes from Adult., John from Deerhoof and Huts (Burazer and Holland’s side project) on the horizon, Tussle shouldn’t have to fight for a bright future.