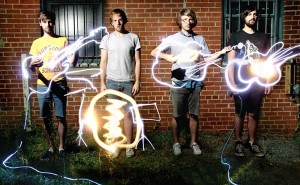 When Maps & Atlases’ “Tree, Swallows, Houses” EP broke in 2006, it felt as if the band was taunting you, that the math-rock wizardry was almost antagonistic in its assault. Live, the local four-piece overwhelmed the senses—but, mostly, visually. Drummer Chris Hainey and bassist Shiraz Dada were immediately recognizable as strong musicians—Hainey’s nearly absurd way of keeping the audience off-guard makes it tough to tear your eyes away from him—and guitarists Erin Elders and Dave Davison’s adventurous plucking, tapping and fret-dancing create a backbreaking storm of intricacies. Most importantly, it wasn’t antagonistic at all, but a shared experience; traumatic at times, sure, but rousing through and through. Math rock’s strange like that—you need incredible patience to fully enjoy it, and yet it seems like you must have no attention span at all to healthily endure it.

Due to excessive touring in support of that EP, it’s taken this long to finally offer another release, a five-song jaunt called “You and Me and the Mountain,” on Sargent House Records (the same label that re-released “Tree, Swallows, Houses,” after the band’s initial self-released pressing sold-out). There’s no question the band searched out a more pop-oriented approach—for one, the songs are shorter than on its predecessor, and while there is quite of bit of inventive presentation and outright chops on display, the melodies are more accessible, the overall bite less harsh. That’s not a bad thing, necessarily—one wouldn’t want a rehash and shorter songs make for more diverse sets.

“Once we decided to pursue music as a more full-time kind of thing, we tried to play around as much as possible, sort of play as many places as we could,” Elders says of the time following the release of “Tree, Swallows, Houses.” “We were really doing everything ourselves at that point, sort of a DIY kind of thing. The last two years I feel like we were trying to play as much as possible, without taking the time to try to write new songs. It’s been kind of nonstop—like we’ve been trying to balance the writing process with touring as much as we can. It’s been exhausting but it’s been really really fun.”

The band’s plan when approaching the new collection was to simplify, to dumb-down the tricky puzzle they had already begun crafting. “I think we all knew we wanted to sort of make the group of songs a little more simple than the first batch of songs,” Elders says. “We wanted to make the songs a little shorter, so they weren’t so in your face. We wanted to really focus on what the song was itself, the melodies, [but we] wanted to figure out a way to maintain the energy we had with the first EP.”

It took a while for the new material to take shape. “With a lot of songs on this EP I think it was a longer process than we expected,” Elders says. “We sort of knew what we wanted—something different, but we weren’t sure how. It was a matter of trying a lot of things, building songs and then breaking them down completely. I feel like towards the end of it we figured out what was working. Even now we have song ideas we had been working on, totally new ideas, and the songwriting process is a lot quicker and easier. It was a good stepping stone that we had to get through [to get to] the place we are now.”

Elders says that during this time the old songs have changed, or at least the way the band presents them live. “We’ve always wanted to find ways to let the old songs breathe a bit more, so we’ve been expanding on introductions to songs, figuring out ways to transition between songs, to sort of give ourselves the freedom to not have to really stick to the original structure too much, kind of get a little more space in there. Not, like, jamming—but more like having these small musical ideas to explore for a little bit.”

Elders says the band plans to get back into the writing process much sooner than it did after the last EP’s release, and that he sees Maps & Atlases using Chicago as home for some time. “Getting to travel most of the country this summer really renewed our love of Chicago,” he says. “You know, you [wonder] what it’s like to live in this city, where there’s not a terrible winter every year, but I really can’t picture ourselves being anywhere else.”