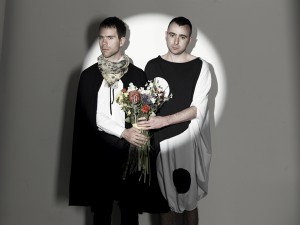 The summer’s waning here in Chicago, but in Australia, spring is in full-bloom. Unfortunately, Aussie group The Presets have been too busy traveling the world to notice the change of seasons. Sydney’s Conservatorium of Music chums Kim Moyle and Julian Hamilton released their second full-length in May, “Apocalypso,” the follow-up to 2005’s “Beams.” The new record went straight to number one on the Australian charts garnering them the accolade of being the highest-selling local act of 2008. They’ve even shut out heavy hitters like Madonna. “In Australia, we were playing in small clubs for a hundred people,” says singer and keyboardist Hamilton, phoning in from Barcelona. “We’re not sure what happened along the way. It just built up, built up. It’s crazy going to number one. Next week Madonna knocks you off the charts, but you’re still there a couple of weeks later.” This fall, it’s more touring and fests, but this time around they’re supporting fellow Aussies, breakout act Cut Copy.

Since the band’s inception, the classically trained musicians have been churning out dance-pop music with electronic proclivities. There’s not much of a dance scene in Australia, so they looked to the dance floors of Europe and Aussie rock ‘n’ roll progenitors AC/DC and Midnight Oil. “Pop music has exploded in so many different directions,” says Hamilton. “I was reading yesterday that there’s a new British band and they called them ‘donk techno.’ Every day there seems to be a new genre that’s harder and harder to define but easier and easier to enjoy.” “Apocalypso” isn’t too much of a departure from their previous endeavors, but it is a progression. “We have to improve all the time or we’d get bored,” Hamilton says. “Generally with our music, we don’t think about what we do, but we want it to be good. It comes out the way it does.”

Hamilton thinks dance music should be physical and likens their live shows to an operatic performance. “At the end of our shows, people are jumping around—even in NYC. At the end of the show people are uncrossing their arms, lifting their chins and dancing around.” Hamilton engages the audience by running around on stage while wearing a colorful outfit, and just doesn’t sit behind a laptop like a lot of electronic artists. “We’re pretty physical musicians,” Hamilton says. “We like to hit things and feel air and hear things coming out of speakers… It’s drama, darling.”

Hamilton and Moyle collaborate on everything together and each brings ideas to the table. They are inspired by an array of things: “There’s so much in our heads from years of living,” explains Hamilton. “Everything from little game-show music from the eighties, John Carpenter soundtracks, having a bbq and cartoons. It spews itself out in its own way. It’s weird for us to hear a band or DJ and say, ‘I want to do a track like that.’ When you’re at home and not seeing bands and not touring and totally relaxed, the best stuff comes.”

Earlier this summer, the guys released a mix tape entitled “Get Off the Beach” demonstrating their diverse taste in music, which includes tracks from Jim O’Rourke to Sepultura. “The best part of being in a band is most people think you’re cooler than you actually are,” Hamilton says. Looking ahead, Hamilton knows what direction he wants to take. “We want to keep making new records. We’d like the gap between records to be shorter and shorter and for our tours to get shorter. And spend more time at home in a relaxed stage writing music and cooking your own food. It’s amazing to cook your own meals.”

The Presets perform live with co-headliner Cut Copy, along with Kordan at Metro, 3730 North Clark, (773)549-0203, on September 17 at 9pm. $21. The Presets and Cut Copy DJ the official afterparty with DJ Jordan Z downstairs at Smart Bar following the show. $10, $5 with Metro ticket/wristband.