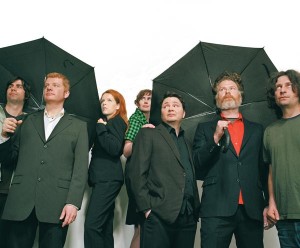 Last year’s Hideout Block Party sticks in my memory for two reasons. One, when The Frames’ Glen Hansard played his “Falling Slowly” song from the film “Once,” the crowd singing its cathartic chorus back to him in unison, it was one of the more touching moments of live music I’ve seen in recent years. But more importantly, the communal atmosphere of the setup, the overall sweeping blanket of togetherness that Hideout’s annual two-day party provides, prevails in my mind. It simply has what most live music festivals do not: heart.

Each summer Chicago sees countless music festivals, some big, some small, some decent, but most tedious. The common complaint is that the sound is substandard—sure, that’s true, it would be much more satisfying to see any band within the confines of an Empty Bottle or a Schubas or a Metro. My issue’s with the bullshit scenester meet-and-greet attitude in which the cattle dress to impress and the music’s lost forever and ever. (Please shutup about your condo. Sam Beam’s being introspective again and I can’t hear him.) Some of the best moments for me from this year’s Pitchfork fest were when fantastic outfit ensembles, intricately orchestrated days in advance I’m sure, were corrupted almost immediately by rain, mud and sweat. Call me a grouch, that’s fair, but it sure was amusing, much more so than Jay Reatard, at least.

But there were, of course, some really great moments this summer as well. Pitchfork had its Mission of Burma, Caribou, Fleet Foxes, Dinosaur Jr., HEALTH and, most importantly, an unforgettable set from Jason Pierce and Spiritualized. Lollapalooza managed even better with sets from Explosions in the Sky, Broken Social Scene, Lupe Fiasco, Kid Sister, The National and (of course) Radiohead that won’t be forgotten anytime soon. Yet, neither will the Rage Against the Machine debacle—it’ll be interesting to see how something like that is better prepared for next summer. (Dates announced already, August 7-9, save the weekend!) Andrew Bird did Chicago good to thousands at Millennium Park just a couple weeks ago; hell, I caught a Cursive set at the Belmont Arts & Music Festival back in June and it was serene. My personal favorite festival moment, however, came on day three of Lollapalooza, walking the Columbus stretch from one end to the other, jabbing with a friend something absurd about Perry Farrell’s protocol, only to be passed by the man himself, being escorted by golf cart, milliseconds later; the smirk on his face, directed squarely at us, has branded itself permanently into my being. And Jane says I’ve never been in love.

Point is, I see the Hideout Block Party, which turns 12 this weekend, as the closing ceremonies to a summer of outdoor noise, and a fitting one at that. Its laidback nature suits the dawn the autumn and, if nothing else, the bill is rich. Saturday includes headliner Neko Case, Monotonix (whose “Body Language” is powerful), Plastic People of the Universe and Little Cow; Sunday’s even better, with Tim Fite, Mucca Pazza, Dark Meat (a must-see), Robbie Fulks, Rhymefest, The New Pornographers (pictured), Ratatat and a closing DJ set by Hercules and the Love Affair. Not bad for a parking lot. The allure of Hideout for me, other than the digs, has always been its apparent booking of friends and supporters—its support of hometown talent, for sure, but also putting up bands that give you a strange sense of comfort. It’s nice to see them not betray that with its biggest event of the year.

Despite some disappointments—let’s face it, Kanye was boring, yet Nine Inch Nails didn’t do much to lure you away—the end of the summer rock-festival season tastes bittersweet. Maybe it’s the impending doom of another worst Midwestern winter ever, maybe the sun already sets too early and we’re clinging to whatever strands of warmth and livelihood we can still grasp. The elite fall schedules for just about every rock club should keep your spirits high—nearly every night from now until Thanksgiving one venue or another has something worth checking out. If this weekend offers anything as striking as the “Falling Slowly” moment of last September, I might deem this entire season a success.

If not, hey, we got My Bloody Valentine next week. You’re going, right?