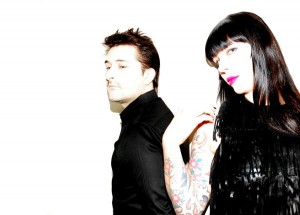 If you take a trip in Dr. Peabody’s Wayback machine—all the way to 2001 (hey, that’s, like, forty-eight dog or club years), you’ll land in the rise of what was then known as electroclash. Miss Kittin & the Hacker were blowing up with their “First Album,” with additional bumps along the way courtesy of Miss Kittin’s trademark icy/cool/detached delivery on Felix da Housecat’s “Kittenz and the Glitz.” But the France-by-way-of-Switzerland ice queen already had roots in Chicago, scoring her first international gig playing records alongside Chicago techno stalwart Mike Dearborn, who had been impressed by Miss Kittin when she opened for him in France.

“I always remember my first times, my visits to Dance Mania or Guidance. It seems like ages ago, and I never could imagine a future like now back then,” recalls Caroline Hervé, aka Miss Kittin.

Miss Kittin’s sharpened deck acumen would be dwarfed by her larger-than-life personality, which gleamed perfectly over the angular beats supplied by her longtime friend Michel Amato aka the Hacker. Now, after an extended break and individual releases, the duo is back in action, performing live in a drastically different musical landscape. So why the reunion?

“I think that Caroline and me needed a new artistic challenge, after a lot of DJing around the world, playing live again seems to be the natural thing to do,” Amato says.

“I personally feel more ready now than few years ago when the whole [electroclash] wave exploded. We are more mature, more conscious and stronger about what we want. I think I was a bit scared before,” Hervé admits.

Older, wiser and more confident, the duo has begun working on a new LP, which will update their artistic legacies. “I think we still have the same influences as when we started, but now we express it in a more mature way. But it’s true that techno is maybe more present in our sound than when we started,” adds Amato.

Getting the opportunity to tour the US once again is an exciting challenge, with their distinctive sound popular with a selective audience. “We didn’t realize how much we were appreciated until we got to know [that] our fans represented such a link between the rock scene and the electronic scene, much more than in Europe. I am very happy about that,” boasts Hervé as Amato agrees. “The techno/electro scene is strange in America, it’s such a big country and the techno scene seem to be so small. Last time I toured [the USA] I remember asking myself if it was really worth it—don’t take it bad… The good point is [that] the American people who like this music are really enthusiastic!” (Duke Shin)