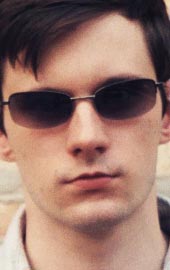 Over the last year things started moving very quickly for Chicago (by way of Indiana) techno artist Decimal, AKA David Spacek, and they’re showing no signs of slowing down. But like the contradictory rhythms that give his minimal beats a fast/slow shuffle, Decimal is approaching his increasingly busy schedule at his own pace, viewing every opportunity as a chance to push himself deeper into making music.

His first twelve-inch releases dropped just last year, and in the ensuing months he’s been named to the Urb “Next 100,” seen one of his tracks dropped on the recent Fabric mix from M.A.N.D.Y. and scored a two twelve-inch deal with the prestigious Soma label. Still he was shocked when Soma asked him to do an entire album so quickly after releasing his “Technicolor Lover” EP. Asking to work without a deadline, Decimal is dissecting his creative process and focusing on the difficult task of writing “a full-length techno album that’s cohesive as a dance project, a techno project and an artist project.”

In the past he’s made his tracks with DJs in mind, but with an album he wants to focus on getting right to the crowds. While he admits he’s not quite sure what this will be just yet, Decimal wants his album to function as a whole and “say something.” He’s still not sure how his creative process will lead him there, but he plans to keep working discrete vocals into the mix and add his own idiosyncratic take on pop to his techno formulations. The goal is “catchiness without being pedestrian,” and a techno album with appeal beyond the clubs.

Just before Soma called about the full-length, Decimal was playing with tech-house, filter house and breakbeat styles to “encourage [his] sense of diversity,” although he’s not looking to use these ideas on the album.

“They’ve gotten so developed and I’ve had so much fun with them, I’ve had to designate ‘Side Project Sunday’ in order to make time for them,” he says.

Even with this level of dedication to his music, Decimal laughs a bit when discussing when his first album might see the light of day. He hopes it’s sometime next year, but he’s more concerned with doing the project right than doing it fast.

“I’m sure the answer is the simplest, whatever that may be. I just haven’t quite figured it out for myself yet,” he says.(Noah Levine)