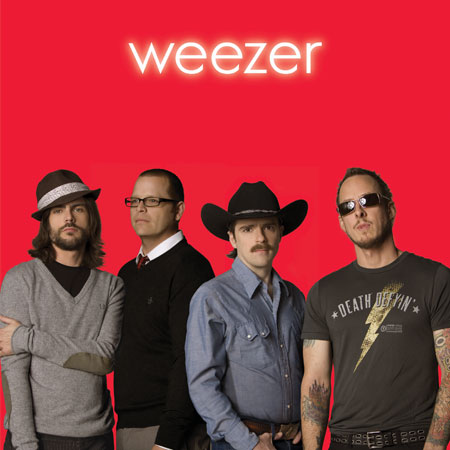 One of the great disappointments in modern-rock history—Weezer’s de-evolution into a third-rate asshead pop band. Creators of two of the great alternative-rock records of the nineties—1994 debut self-titled record (or the “The Blue Album”) and 1996’s highly influential wonder, “Pinkerton”—who returned to the scene unexpectedly in 2001 after a five-year absence, has since made four albums, all of decreasing value. (=w= for worthless.) To some loyalists, like those that will fill Allstate Arena tonight, it’s excusable, and these people are to blame just as much as the band. The support and encouragement is terrifically frustrating, like with the people who watch “According to Jim” just because it happens to be on TV right now. Some critics have dared to claim Weezer’s new record, it’s third self-titled affair that’s being called “The Red Album” due to its cover art, boasts some of the band’s best material, and that inexplicable evaluation couldn’t possibly confuse me more. The dumbing-down of Rivers Cuomo’s songwriting, his steady landslide into mass-pleasing blandness (see songs like “Pork and Beans,” “Beverly Hills,” “Perfect Situation”), is insulting to me. If I wanted to hear less than half of what Cuomo was capable of writing I’d listen to Blink 182. I’ve been able to, in my mind, consider the Weezer from the previous decade a completely different band than the one right now, so the first two records (and their staggering b-sides, still the best of any band, period) haven’t been tainted for me. Maybe former bassist Matt Sharp really did make that big of a difference. Either way, you don’t have me fooled Rivers, and I can only hope you’re trying to hide your shame behind that unfortunate moustache. (Tom Lynch)