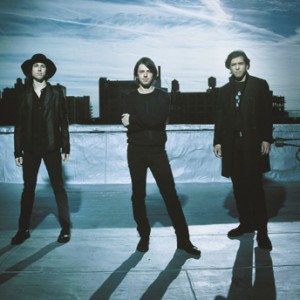 “Space-Rock” is such a bizarre label if you really stop to think about it: how can any style of music embody something that is a vacuum of sound? When did rockets and astronauts and the moon become equated with slow, droning fourteen-minute synth solos? Admittedly, I do know one thing—space is big, and self-proclaimed space-rockers The Secret Machines are as big of a band as they come. Everything about their new self-titled album bursts with an epic hugeness. Josh Garza’s drums plows along, the bass drum especially accentuated in the mix and new guitarist Phil Karnats hits you with one long, droning power chord after another, while the synth effects of Brandon Curtis honestly give off a serious Spinal Tap vibe. It’s an album that’s hypnotic and easy to get lost in—prog-rock at its best—yet it’s still enormous, booming, bombastic. You can almost imagine each band member playing ninety feet from each other, as if mandated to do so by the laws of nature. If this is space-rock, then it can easily beat the shit out of the earth-rock. (Andy Seifert)