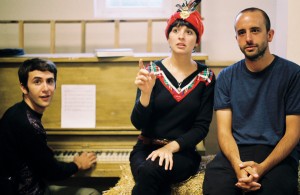 Daniel Smith, frontman for the bizarre performance-rock band Danielson Famile and also this group, writes music that’s both appropriate for Christian-rock festivals and horror-movie soundtracks. Weird ain’t the half of it; anytime you get a mix of indie-pop, experimental rock, gospel music and Smith’s shrieking falsetto, you’re in for an experience, and that’s not even considering the massive costumes worn on stage. The deeply religious Smith hasn’t released a Danielson record since 2006’s memorable “Ships,” which was a behemoth of an album that featured dozens and dozens of musicians’ efforts. Live, it’s bold and, at times, beautiful. Asthmatic Kitty artist Cryptacize opens, and the band’s debut, “Dig That Treasure,” boasts lovely, spare arrangements that somehow skyrocket into vast complexity through out-of-nowhere shifts in structure; the record keeps you on your toes, even when it’s at its most confusing and would normally turn off listeners. The double-vocals between Chris Cohen (once of Deerhoof) and Nedelle Torrisi add a gentle, heartwarming effect, though that might not be their exact intention. Everyone has skeletons in the closet. (Tom Lynch)