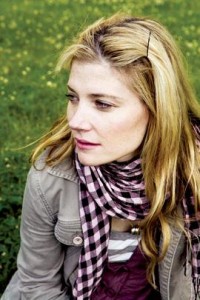 It’s not incredibly difficult to play the guitar in the finger-tapping style, possibly most popularized by Eddie Van Halen, copied by hair-metal acts in the years to follow and then later adopted by math-rock nerds. It is, however, very difficult to do it confidently and inventively and avoid the maneuver sounding too much like a gimmick. If a musician achieves this, on stage it’s pretty overwhelming. (Every time I see Maps & Atlases I start to panic, in the most positive way you could imagine.) New York City artist Marnie Stern released her debut “In Advance of the Broken Arm” (Kill Rock Stars) in 2007 to wide acclaim—her complicated song structures and virtuoso guitar-playing landed her on Venus’ list of best female guitarists of all-time. As impressive as the record is, it was only a hint at what Stern could achieve—her new record, the exhaustingly titled “This is It and I am It and You are It and So is That and He is It and She is It and It is It and That is That,” again on KRS, features one mind-bender after another, aggressive prog-punk jacked to the max. Stern invites you into her warm, humble home and once the door’s closed kicks you in the nuts. The finger-tapping is used not as a guitar-solo technique, but to build foundations for songs; it’s like, if you base your songs with complete insanity, where the hell do you think they’re gonna go? Stunning work from beginning to end. (Tom Lynch)