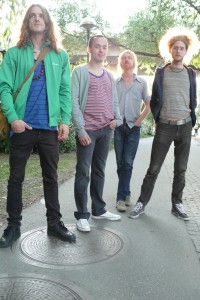 The first time I was told to check out Dungen showed just how intrinsically stubborn I had been in rejecting bands that didn’t sing in my native tongue. I hadn’t merely snubbed the band after listening to just one album, or one song or even one minute. I shoved their album out of my face after glancing at the song titles and summarily dismissing the band as some sort of hipster fad—how could a song titled “Har du Vart’ I Stockholm?” or “Natten Blir Dag” possibly speak to me when most of the English-speaking bands couldn’t even pull it off?

Hopefully there weren’t any other assholes out there who thought like that, because obviously wonderful music can transcend any language barrier, and Swedish psych-rockers Dungen produce music that kicks too much ass for anyone to truly care about lyrical motifs. Some of the group’s classic songs, like the joyful single “Stadsvandringar,” or the three-piece simplicity of “Panda,” could be sung in Klingon and it wouldn’t hinder the overall quality (it might actually help).

Dungen’s new album, “4,” sees lead singer/songwriter/producer Gustav Ejstes continuing to blend genres while abandoning some of the reverb that allowed its previous releases to sound straight off some late-1960s Brit-rock vinyl. During the recording of the band’s three previously releases (Ejstes, by the way, admits the title “4” for the fourth album is “very boring,” but pointed to the classic-rock act Chicago, which only used numbers in its discography: “I’m totally into Chicago ‘II’ through V.'”), Ejstes mostly performed the entire record by himself. But “4” allows drummer Johan Holmegard and guitarist Reine Fiske to take larger roles, and the result, Ejstes says, is kind of more of the same, just considerably tighter.

“The drummer on this new album, he is definitely an extension for me, my arms,” Ejstes says. “I have played a lot of drums myself and been totally into that, on the earlier albums. He could do my style, but even better. Reine, he’s a genius…They are extensions of me, it’s like we have the same kind of way of playing.”

With a band ready and willing to feel out the songs with him, Ejstes took to the studio with a new attitude toward his songs. No longer would the songs be recorded the day they were conceived—these songs would be developed, would evolve a little before the recording stage.

“It becomes another music when there’s other people,” he says. “I had always done it myself, and I felt I had done that do-it-yourself thing, I wanted to try to get a little bit more,” he says, before pausing. “But at the same I’m a huge control freak. I have been doing this band thing, but I have a small, black mustache under my nose, I think.”

Aside from Dungen’s propensity to melt your face a little with big, Jimi Hendrix-style distortion (Ejstes actually says “Our speakers go to eleven” at one point), the band spends a substantial amount of time in jazzy interludes, and the instrument that does most of the soloing seems to be the flute. A natural query: what the hell is a flute doing in this band? Turns out, Ejstes love affair with the instrument came about after becoming consumed with jazzy hip-hop of the early 1990s.

“This flute thing was something I had to do, I had to learn how to play the mixes and the stuff that I loved on the funk records,” he says. “So I picked up this flute, and it cost me my girlfriend. I isolated myself for like a month [to learn to play it], and she was so sick of it that she broke up with me.”

As for that whole language-barrier thing, Ejstes doesn’t mind if nobody in non-Swedish speaking countries can decipher the meaning of his lyrics. The words mean something to him, and lyrics can be analyzed to support whatever theme the listener wants or needs to hear anyway.

“I’m a huge fan of music from all over the world with lyrics and music which I don’t understand. Anything in, like, Turkey,” he says. “So it’s not that important. For me, the lyrics are a huge part for myself. But I have always seen the vocals as a part of the music, like an instrument. I’m no singer in the other sense.”

I discovered this band through a friend in 2004 when he sent me a copy of their Ta Det Lgunt release which I still find myself coming back to more often than I would have predicted.
Jesus, it’s Swedish band, who would have guessed they would be channeling the 60’s psychedelia and other worldly soundz.
Thanks for the thorough review, I’ll check it out.