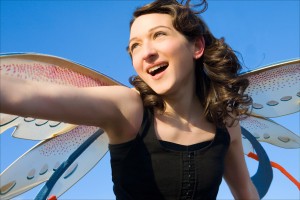 With 2006’s “Bring Me the Workhorse,” New York’s Shara Worden burst onto the art-rock scene with a voice just a note or two away from the opera house, a soprano that in some aspects relinquishes the spotlight in her sophomore effort, “A Thousand Shark’s Teeth.” This time around, Worden’s orchestral backings play the vital role, her arrangements spearheading classical flourishes that allow Worden to aimlessly songwrite, exploring the boundaries of her work rather than repeat some obligatory chorus. Ultimately, “Shark’s Teeth” proves a challenging, difficult listen to any audience with an inclination for traditional songwriting, but there are still a handful of unquestionably elegant moments, like the opener “Inside a Boy,” where the strings, horns and woodwinds converge with such emotional force that they suggest Worden may have a masterpiece floating around her head which could manifest itself in due time. (Andy Seifert)