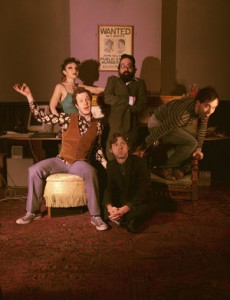 Chicago’s up-and-coming Unicycle Loves You represents the inevitable outcome from a growing list of indie bands intent on blending genres no matter how seemingly incompatible. The band’s self-titled debut takes that tactic to its logical extreme: mix virtually every successful movement of the last sixty years and see what happens, resulting in ten lively, unpredictable tracks that flow without warning from Belle & Sebastian quirk-rock to late-1970s butt-rock to bluesy psych-rock back to Beach Boys pop. Eventually the album runs out of pop-culture movements to beholden and the hooks start feeling a tad stale, but at the very least, the first two-thirds come across as breezy, fun rock ‘n’ roll. Eventually, these guys may want to wean themselves off a couple of genres, but for the time being, it’s enjoyable enough to indulge in a few pop hooks and observe the evolution of a band that’s presumably a few years before its prime. (Andy Seifert)