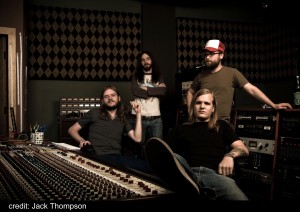 Your first mistake would be to think The Sword is kidding.

When the Austin metal band’s debut, “Age of Winters,” came out in 2006, some critics and fans thought the band’s throwback to Iron Maiden-like riffage slopped together with Sabbathesque sludgery—plus lyrics that recalled the Celts and Norse mythology—were supreme nudges of irony. Nope, and all for the better. “We’re just a metal band,” says lead guitarist Kyle Shutt, “and we’re out to wreck shit. There’s nothing funny about it. We’re really funny guys, but we’re really fucking serious about the music we play, making sure it’s totally punishing.” A-fucking-men.

When a band titles its debut “Age of Winters” and follows it up with a record called “Gods of the Earth” (came out in April on Kemado), the road’s pretty much been paved for the kind of meal you’re to be served. The dueling guitars, meaty, brimming with confidence, attack from all sides. The intricacies are not only impressive, they’re impressive while being genuinely mean. Like much of the best metal, they take some root in seventies classic-rock riffing, but there’s much hot-dogging to be done past that (no wonder this band’s been featured on one of those “Guitar Hero” games). And, yes Kyle, it’s punishing. The incessant pounding of the snare drum helps beat you up as well. J.D. Cronise’s vocals, more than adequate for the material, offer charming notes like “Waiting for the dawn on the snow-covered tundra/Your foes lying dead at your feet/Look to the sky for a good star to guide you/And pray that the morning you’ll meet.”

Shutt contends that the band grew considerably during the process of putting together the new record. “We learned a lot more with ‘Gods of the Earth.’ ‘Age of Winters’ is easier to play, at least it seemed easy. We recorded it by ourselves, there was no pressure…we didn’t really expect anything, and people responded to it and it took us aback. We kinda went a little more professional [recording the new record], decided to go into a real studio, track the drums. Before we did it in Bryan’s house [Richie, drummer], and it was just hanging out, more like fun. This time it seemed like work. It took us a long time to get it nailed down.”

Shutt says that while the band was recording “Gods of the Earth,” he was concerned about capturing the group’s live sound. “The song itself exists when it’s the four of us playing together,” he says. “When you make an album, everything is all separated and chopped up. I feel like we can’t get the soul of the music captured. The live show is way more devastating. I totally wish I could go back and record my solos again. Live is where it’s at.”

The band’s been on tour opening for Metallica—Lars Ulrich is a fan and got the band to sign on for the year-long jaunt all over the world—which is a coincidence, Shutt says, because he recently sat down to learn all of Kirk Hammett’s guitar solos, just as an exercise. “That helped me get better,” Shutt says, though he says he hasn’t told Hammett about the free lessons. “No, I haven’t actually,” he laughs. “They’re all nice guys, I’m just trying to keep my cool.”

The Sword is big, full of might and, at times, poetic. Cronise’s lyrics don’t make you chuckle with goofy adoration as much as they make squint your eyes and whisper a “Fuck yeah” to yourself. Let’s face it, if done with any level of mediocrity, this material would just seem absurd. But Cronise pulls a verse like “At the bidding of the high priest/The tribes gather for war/Evil sorcery is unleashed/Upon the opposite shore” with aplomb, and I’ll tell you what, these days I’ll take that over any “You gotta spend some time, love, you gotta spend some time with me.”

“J.D. is really eloquent,” Shutt believes. “The lyrics aren’t really funny. It’s kind of like when you hear a rap song, and they drop a really good rhyme. You laugh, but only because it’s so good. The only reason why you laugh is because it’s so awesome.”