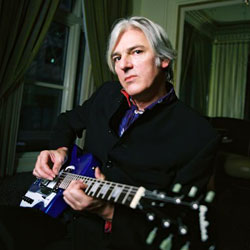 Years from now, when historians write the book on twentieth-century pop songwriters, Robyn Hitchcock could very well end up being deemed “the English Tom Waits.” Of course, musically Hitchcock has always leaned more psychedelic and quirky than folksy and gruff, but both have shared a uniquely uncanny ability to stay firmly below the mainstream cultural radar while still cultivating enduring careers with endearingly obsessive fan bases. Also like Waits, Hitchcock has always seemed to carry himself with a slightly more mature bent than the rest, yet in terms of creativity and artistic relevancy, he never seems to age.

That being said, the last decade has seen Hitchcock dip the occasional toe in the nostalgia pool. In 2001, he reunited with his original band The Soft Boys in support of a reissue of the group’s cult opus, “Underwater Moonlight.” Then, the following year found Hitchcock revisiting his roots even further back with the release of an album of all-Dylan covers titled “Robyn Sings.” Most recently, Yep Rock Records has embarked on the task of reissuing his earliest work as a solo artist and with his band The Egyptians and this fall Hitchcock himself is taking to the road to perform what most consider to be the finest of that lot, 1984’s “I Often Dream of Trains.”

“It seemed like a good time to do it,” says Hitchcock about what he’s calling a “director’s cut” performance of his dreamy cult classic. “It’s been released for the fourth time now, and it seems to come out every ten years or something and there’s always a different extra track. So I thought I’d just take it back to what was originally there, lose a couple of songs that went in and just do the ones I originally planned.”

While once a rather novel idea, bands performing quintessential old favorites in their entirety live on stage has practically become an annual rite of passage these days. Asked about why he thought the concept has become such a phenomenon lately, Hitchcock says the reason is merely a factor of time. “It probably started with tribute bands and then I think people realized they could do tributes to themselves,” Hitchcock muses, “people realized that they’d been playing for so long that some of their records were historic. And that not only gives you the vertigo of time, but it also makes you think, wow…I did something that’s lasted!”

But what is it about those certain albums that makes us keep coming back to them again and again years after their release? “I think the thing about ‘Trains’ that people like is that it’s a mood record,” notes Hitchcock. Looking at the favorites in his collection, Hitchcock sees a similar pattern. “’Avalon’ by Roxy Music, ‘Before and After Science’ by Brian Eno, the second Band album… they’re not necessarily the best songs that artist has done, but they’re all records that you put on when you want a certain mood.”

In addition to immersing himself in such records around the time of recording “I Often Dream of Trains,” Hitchcock was on a bit of an ethereal journey himself. “I just was disappearing really,” he says about the period of his life that led up to the recording of the album. “I had just decided to see what it would be like if I let everything go and not make any more records as me. I gave up live performance and I think I just think I wanted to see who I was and what I wanted to do.”

Hitchcock’s self-imposed exile led him to Norway, where he found himself wandering the diverse landscape of mountains and fjords and working odd jobs to stay afloat. However, he did end up buying a four-track tape machine to record some song ideas along the way, and the resulting sketches eventually convinced him not to abandon his craft completely. It was those introspective musings that eventually resulted in “I Often Dream of Trains,” a low-fi and low-budget effort that initially received a pressing of only 1,000 copies.

“In a way, Trains came out the best possible way…which was with no advertising,” reflects Hitchcock. “And you know, if there had been adverts for it and it had been on the radio and stuff, maybe it wouldn’t have been so good. People just discovered it, and still largely do by word of mouth.”