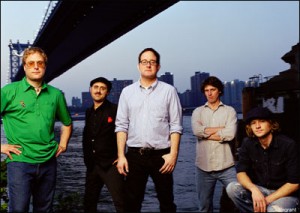 One thing it appears everybody loves about Brooklyn quintet The Hold Steady: virtually every member is really, really ugly. Seriously, don’t they all give off that “creepy middle-aged guy at the party” vibe? If, say, the guys in Sigur Ros looked like these dudes, people would be jarred at their sight, but for The Hold Steady, nothing could be more apropos—after the release of this year’s “Stay Positive,” Craig Finn and company have become America’s quintessential bar band, playing sloppy, power chord-driven indie-rock with motifs ranging from getting really sloshed on booze to getting really messed up on other, unspecified drugs. The band develops drunken euphoria with its organ-drenched tunes, bringing the sex and drugs (and also some fairly substantial introspection on growing old) back to rock ‘n’ roll, expanding on their sound from 2006’s universally acclaimed “Girls and Boys From America.” If they were even halfway attractive, you could call their bluff—but these are fellas you can honestly picture drinking Milwaukee’s Best, which makes their stories that much more genuine. (Andy Seifert)