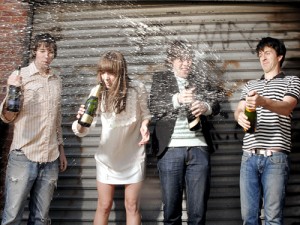 Brooklyn’s Bishop Allen seems like one of those bands that is way too academically intelligent to release any sub-par material. Core members Justin Rice and Christian Rudder both attended Harvard, both have starred in indie film festival favorites and, when called for an interview, the entire band was engrossed in completing New York Times’ genius-level “Think Outside the Box” crossword puzzles (a total slap in the face to those of us average Joes who can’t even complete the normal crossword puzzles, not to mention having to settle with attending Brown).

With last year’s “The Broken String,” the band’s first on the Dead Ocean label, the band reworked songs from their “12 EP” project of 2006 (in which the band released an EP of new material for each month). Clearly, the “12 EP”’s idea had “brilliant move” written all over it: a great viral marketing campaign that also stretched the limits of the band’s creative restrictions, and the rearranged songs on “Broken String” benefited wonderfully from tweaking what were already half rollicking, half eloquent, and always catchy tunes. But these are Ivy leaguers, so clever ideas are expected—the real question is what elitist, East-Coast concepts do they have in mind for their new album, “Grrr…,” due out in February 2009?

“A lot of animals,” Rice says. “I don’t know why. That was not on purpose. Just one of those things that you start writing, and at the end you look back and animals have popped up everywhere. Tigers, snails, that kinda thing.”

Rice describes the forthcoming “Grrr…” as a “toe-tapping record” that’s “a little less ponderous, a little more jovial” than “Broken String,” but that lessons were certainly learned between their last record and the deadline-influenced twelve-month EP project.

“A lot of that was taking whatever idea we had and following through until we had a complete song,” Rice says of the EP project. “Which is an interesting thing to learn, because sometimes if you had a sense of what an idea is going to turn out like, often times you’re wrong. Sometimes things you didn’t have much hope for turn out better than expected.”

The impact on Rice and Rudder’s songwriting appears to be a “try anything and see where it gets us approach” that led to demo-ing song after song for the new record. “We sort of had a sense of the spontaneity and the vivacity that we wanted to go on the record, and we tried to bring that into the songwriting process,” Rice says. “We just kept trying it out by recording different demos, and throwing stuff out there until we stumbled across things that we liked. Sort of a mad scientist laboratory.” (Andy Seifert)