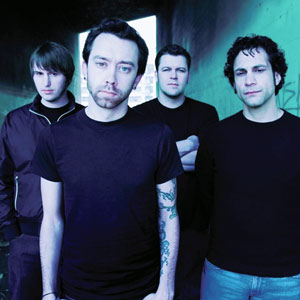 To say it has been a busy year for Chicago’s Rise Against would be an understatement. With a new record doing well for them on the charts, frontman Tim McIlrath says though the band has had an intense schedule, the journey has been worthwhile.

“This year has been awesome,” McIlrath says. “We got off the road last January, had some babies, wrote the new record in Chicago, recorded it in Colorado, and mixed it in L.A. in the spring. Went to Europe for a few weeks, had some more babies, did two weeks on the Warped Tour, then got back in the saddle for the fall tour we are now on with Alkaline Trio, Thrice and the Gaslight Anthem.”

With all the childbearing aside, the band that rose from the local Chicago scene in 2001 is returning home for a two-night engagement with the aforementioned supporting acts in tow.

“Chicago is where I grew up going to shows,” McIlrath says. “To play on the same stage where I saw my favorite bands is definitely a rewarding experience. It’s also where I get to show my friends just exactly what it is I do all year while I’m gone.”

Rise Against began this tour last month in support of their fifth studio release, “Appeal to Reason,” which hit the racks in October on DGC/Interscope Records. This saw a third teaming with producers Jason Livermore and Bill Stevenson, of Black Flag and Descendents fame, who worked with the band on its previous records “The Sufferer and the Witness” and “Revolutions per Minute.” McIlrath contends that the creation process for the band has been one of not overanalyzing the process.

“We took the same approach to this record as we’ve done to our previous records, which is actually a lack of approach. There’s no approach. It’s just show up and let’s play. There’s no plan, we don’t map it out, we don’t decide on a direction. We just kind of let it happen real naturally. That’s how it happened.”

And apparently, that creative process has worked for them. “Appeal to Reason” debuted at number-three on the Billboard chart, number-one on the Billboard Digital Album chart, and the first single, “Re-Education (Through Labor),” the song that begins the record, number-four on the Modern Rock radio charts.

“It’s a good way to start off the new record, because I think the album has a lot of progression and something different to offer,” says bassist Joe Principe. “I think that song represents us the best.”

The Gaslight Anthem from New Jersey is one of the three bands supporting this tour that wraps at the end of the month. Drummer Benny Horowitz is excited about the progress along the road so far.

“It’s the biggest tour we’ve ever done,” Horowitz says. “We weren’t really acquainted with the other bands before we went, but the shows are going incredibly well and the bands and crew on tour have been really supportive and fun. New friends and good shows. All you can ask for.”

Hailing from New Brunswick, the Gaslight Anthem is also supporting a new record, “The ’59 Sound,” which is its debut on Side One Dummy Records. The band had the opportunity to work with former Flogging Molly guitarist Tedd Hutt, who produced the last two Street Dogs albums.

“Making this record was a completely different recording process than anything we’ve ever done before,” Horowitz says. “It’s the first time we ever worked with a producer and I think we all had to get used to that, but it allowed us to do a ton of stuff that we wouldn’t have tried before.”

Unlike their previous full-length, “Sink or Swim” on XOXO Records, which only took two weeks to record, the Gaslight Anthem spent six weeks in the studio crafting “The 59 Sound.” The result was an homage to the styles that have spoken to the band musically, combining their New Jersey punk roots with rock and soul songwriters that inspired them as well: Bruce Springsteen, Otis Redding, Tom Petty.

“So far the response has been overwhelming,” he says. “It’s doing better than anyone expected. When we walked out of the studio, we knew we thought it was good, but we were totally baffled as to what others would think. Luckily, people seem to dig it. Even people who were into our last record stuck with us. So, so far so good.”

Horowitz says his firsthand experience on this tour is all the reason folks in Chicago need to come out to one of the shows.

“I’ve been seeing this tour every day for a month and it’s well worth the ticket. All the bands put on a great show and we’ll try to warm up the night as best we can. And, in the spirit of the city, maybe I’ll wear my Charles Bronson ‘Youth Attack’ shirt.”

“If you need to be encouraged to come out to a show this awesome, then maybe you don’t belong there in the first place. It speaks for itself.”