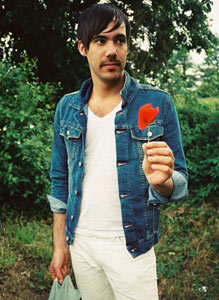 Saccharine indie-pop, fuzzed-out, slightly frayed, propulsive-yet-melodic…is this the self-described “fuck pop” that former Death From Above 1979 drummer/vocalist Sebastien Grainger refers to on his debut Saddle Creek-released LP “Sebastien Grainger & The Mountains”? After all, it does seem as if the DFA 1979 duo split into neat little halves, with former band-mate Jesse F. Keeler laying claim to the hyperkinetic dance-punk energy in his MSTRKRFT project, leaving Grainger to make do with plenty of discarded bits to craft into power stadium rock (“Love Can Be So Mean” and “Niagra”) or tuneful pop (“American Names” and “Meet New Friends”), and maybe glomming just a touch of disco bounce (“Renegade Silence”). Sure, it’s nothing mind-blowing, but Grainger’s tunes and his touring band will bring a good dose of feel-good energy to the Beat Kitchen, showing promise for the future. MSTRKRFT’s fifteen minutes of electro-mayhem fame might be done running its course. Maybe we should look at the other guy writing tunes? (For more on indie-dance breakups spawning both a breakout new band and a later overshadowed-but-potentially superior act, see Simian Mobile Disco vs. the Black Ghosts.) (Duke Shin)