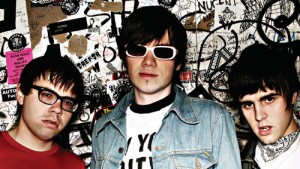 It’s nearly impossible these days to produce critically successful albums in certain much-maligned genres that have been deemed inaccessible by the underground scene; case in point, the label “emo” virtually entails the band was conceived during a Conor Oberst/Chris Carrabba-influenced relationship breakup and that they consider quivering/yelping vocals as musical development. In other words, “emo” means your band sucks. So, let’s try and give “pop punk” an honest and fair shakedown and inspect The Pink Spiders from the punk-rock capital of America—Nashville! For a band that’s opened for such abominations as Kill Hannah and 30 Seconds to Mars, Matt Friction and his hellraisers have few noticeable flaws; their songs never delve into genitalia-inspired themes (Blink-182), nor do they flaunt their “punk rawkness” in blatantly hypocritical fashion (Good Charlotte). The new album, “Sweat It Out,” even features a couple of feel-good Cheap Trick-esque anthems, but the overwhelming majority of tracks plow compliantly into extremely familiar territory: riff, verse, compressed power chords, chorus, three-note Moog riff (optional), repeat. It’s just too generic to recommend, unless you still think Jared Leto should continue trying to be a rock star, in which case The Pink Spiders might be a step in the right direction. (Andy Seifert)