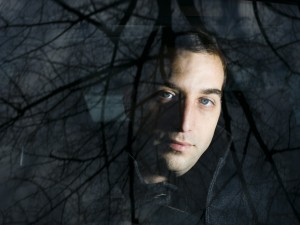 His biography describes him as unassuming. Numerous interviews pegged him as detached and preoccupied. Marc Houle is coming to Chicago, and his recent production efforts suggest not an inwardly focused ponderer, but a dance-crazed whiz in the studio.

Houle is the first to admit that his ostrich-in-the-sand approach to his work has certainly caused observers to cast him as the introvert, confessing, “I am really detached when it comes to modern techno—I tend not to ever listen to it on my own. But, otherwise, I am not some weird hermit; I can see how people would think I am strange sometimes, though…I can be that, too.”

Houle is an integral part of a Minus crew, led by the venerable Richie Hawtin, that is changing the face of global techno with every tour and every release. Though venues must comply with their logistical plans, the result is always mind-bending. Minus DJs and live acts are cast-off by non-believers as “boring” or “too minimal,” only to find that techno still holds promise, perhaps now more than ever. His 2004 efforts with labelmates Magda and Troy Pierce (as Run, Stop, Restore), and appearances on the 2005 Minimize to Maximize Tour, cemented Houle’s place in this endeavor.

“The techno I learned was from going to all those Detroit parties in the early nineties, and it’s the techno I still make. I don’t think I am doing anything but continuing that great sound,” he explains. His act is always performed live, during which new productions are scripted ad hoc in an attempt to push crowds into motion.

Houle emerged from an era for which the modern club-goer remains nostalgic. Many traveled from state to state, especially within the Midwest, for raves replete with walls of speakers and DJs channeling raw, new sounds. Whether heard in warehouse, loft or simply the vehicle en route, these sounds made sense, though rooms were often segregated by genre: house techno, jungle, ambient. What Minus is doing—sans the jungle, of course—is bridging those gaps on a global scale.

“The techno I loved to dance to and the new-wave music I made at home were always two separate worlds to me, until times changed and people were more open to dancing to bleepy, new-wave music instead of just hard techno. What is known as ‘Minimal Music’ today seems like a really nice mixture of Chicago jack-your-body house and Detroit techno.” Houle enjoys the fact that much of the world is “coming to its senses” and “realizing how good that music is.”

Houle’s brand of “bleepy, new wave music” is characterized by the classic video game samples that denoted you had either lost, won or fired a weapon. Growing up in Windsor, he was hooked on early gaming systems like Atari and Commodore, while being simultaneously trained to play piano and drums. Enamored with New Order, Depeche Mode and Kraftwerk, he pursued the Detroit rave scene, but stayed true to his new wave and video-game roots. Today, his style is an amalgam of those primitive sounds and driving rhythms. Efforts with new and vintage gear target new forms, but for now, his style shines through, and he remains quite modest about it, stating plainly, “I am aware of how the others on Minus are changing things, but I don’t see any real influence of my own.”

His approach to studio work ensures he misses many of today’s exciting new gaming titles, while his live-only performances guarantee a total detachment from the chart-driven appetite of the techno DJ. Says Houle with a laugh, “Even if I did learn what modern stuff to play, I would feel weird because I didn’t make any of it.”

Houle’s future involves the dismantling of his studio, but fans need not lament. He will rebuild it—a process he feels all musicians of this type should develop—and plans to record sounds with the sum of his equipment, the Yamaha DX-7 being his current favorite. His love of vintage synths does not imply a distaste for studio software, and he elaborates, “It’s just what I love to do—plug in cables and collect lots of synths. I love how each of the old synths has such a distinct personality and different approach to programming and playing it.”