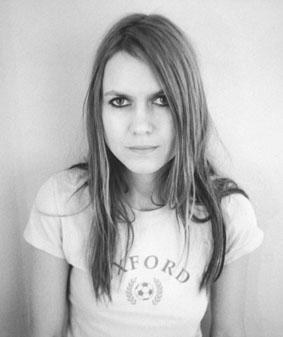 Juliana Hatfield’s biggest strength has always been her voice. It works against convention—the breathy, seemingly unstable delivery has been battling her alt-rock symphonies for more than two decades. The songwriter, she of Blake Babies and the Lemonheads, plus, of course, her solo career, has managed to maintain a balance of traditional early-nineties rock and sweet, sincere balladry, never venturing into sap territory ala Sheryl Crow or Sarah McLachlan. A nineties music icon of sorts—how many of you remember her guest appearance on “My So-Called Life” as vividly as I do?— she understands straightforward pop music doesn’t have to induce eye-rolling, and the 41-year-old Massachusetts native has succeeded yet again with “How to Walk Away,” her tenth solo record. An admittedly mellower affair than usual, Hatfield can still pack a punch, plus offer plenty of surprises—sex is certainly on the brain for this record, released by her own label (Ye Olde Records), with songs of carnal explanation (“Just Lust”) and, in turn, despair (“This Lonely Love,” “So Alone”). The nostalgic sound, well, works for those really longing for it. Call it a warm embrace.

“I guess I was feeling less angry,” Hatfield says of her state-of-mind while writing the new record. “I was feeling more just sort of, um, what’s the word? Vulnerable. Sort of beaten down. I was feeling a little beaten down with [2005 record] ‘Made in China,’ but with ‘How to Walk Away’ I was starting to feel hopeful again. I was humbled by the things I had been through, wanting to find a hope. It’s kind of a sad and lonely record, but also kind of hopeful.”

How does she feel she’s changed as a songwriter over the years? “I think I write better lyrics now,” she says. “I don’t always go for the easy rhyme. I think I put more thought into it. I’ve learned to be more artful with the lyrics…some people can write a brilliant masterpiece when they’re 21 years old. But not me. With me it comes from experience and growing up a little bit.”

Hatfield’s also recently delivered a memoir, “When I Grow Up,” which chronicles her life in rock, plus her now-publicized battles with severe depression. “It was strange because it was so new to me,” she says of writing the book. “I had never written a book before, I had to learn how to. I had to train my brain to work in a new way. I’m used to writing three-minute songs—this was totally different. I had to sustain a level of concentration over hours and days and weeks and months and years. It was really different than writing music.” (Tom Lynch)