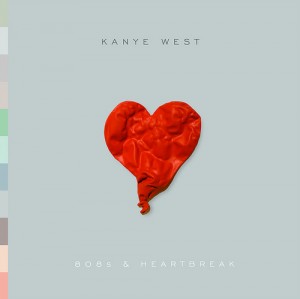 In a perhaps unsurprising development, Kanye has gone all emo on us.

Beneath the mountainous ego and flash-camera bravado, West’s work has forever hinted at inner doubt and turmoil. His confidence is a fort he’s built around himself to help hide and protect his insecurity. We’ve seen it all before. With “Stronger,” he blatantly, and maybe even successfully with the strength of the song itself, tried to convince the legions of adorers that he doesn’t need that constant affirmation, that, indeed, whatever doesn’t kill him makes him stronger.

Has the death of his mother and the recent breakup he’s experienced with his fiancée made him stronger? It may be too early to tell, but if his new record, “808s and Heartbreak,” is any indication, he’s a broken man. Whether the record is, for West, another step in the grieving process, a toss-away experiment that’s just a moment in time or a record he’s made for himself, as if a collection of diary entries, and talked into handing it over to the public (just a theory), it’s been a while since one record has caused so much discussion, argument and analysis.

Of course, Kanye West is a rather large pop star with global fame. Emphasis on pop as well, as his dedication to incorporating elements of multiple genres has kept him from strictly being a hip-hop artist in the traditional sense, and if you need more convincing, just listen to a track or two from the new record. If you haven’t already heard a bit of it, if not the whole thing, you’ve most likely already read about it. West sings through Auto-Tune—that useful tool so prevalent on top 40 radio that, while employed, adds a subtle (but noticeable) synthetic quality to the vocals and, probably most importantly, conceals flaws in the vocal performance. Kanye’s no singer, and he knows it. The “808s” in the album’s title references the vintage Roland TR-808 drum machine that West manipulates for the record’s percussive programming. The heartbreak is evident.

In essence, “808s and Heartbreak” is a minimalist electro-pop record with an extraordinarily little amount of hip-hop. A bedroom album that’s already positioned itself in the public’s mind, after only a week or so after release, as more of a side project than anything else, it’s like the international superstar equivalent of Atlas Sound’s “Let the Blind Lead Those Who Can See But Cannot Feel.” West’s vocal melodies are decent, at times even impressive, and it’s too bad the pesky Auto-Tune can be so distracting. If the tool, in this case, is supposed to supply a sense of emotional detachment, it works, if a little obvious. If it’s primarily just an answer to a rather considerable problem of Kanye having a pedestrian voice, well then it simply is what it is and we just need to get over it.

But, damn that Kanye, he’s managed to make some more completely penetrating songs. Singles “Love Lockdown” and “Heartless” succeed in a somewhat radio-friendly way, record-best “RoboCop” (dumb title, yeah) is a remarkably convincing electro ballad and opener “Welcome to Heartbreak” couldn’t more frankly set the tone. Whether or not his fans want to hear Kanye sing the line, “I’m just not there/Life’s just not fair,” as he does on “Street Lights,” is up for debate. But that’s the kind of record this is, dowsed in self-pity and despair. It’s like he’s a child who’s experienced disappointment for the first time and he’s looking for guidance, puppy eyes desperately looking upwards for solace. I’m just like you, I just didn’t know it. His heartbreak is of epic proportion, yet, sadly, it’s not necessarily unique.

He’s right when he says he can’t turn to his riches for comfort. After this particularly bad split that left him emotionally bankrupt, there’s no “vacation spot he can fly.” He should turn to art like the rest of us sad sacks.

With “808s and Heartbreak,” West’s major achievement is not in the moments of significant pop-song creativity—one assumes he can construct a likeable hit without much effort, his talent’s so enormous—but rather the response he’s able to get from his listener, the lasting effect that, if previously pondered, seemed a substantially distant possibility. Sympathy isn’t often what major artists and their Gucci bags and Earth-sized egos evoke, but after this, you can’t help but feel sorry for Kanye.