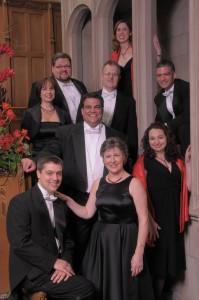 Chicago a cappella is exactly that: a group of unaccompanied professional singers all of whom center their wide-ranging singing careers in Chicago. Each singer is an accomplished soloist but the ensemble—which ranges from nine to twelve singers, depending on the repertoire performed—prides itself on its precise ensembling as a group, which has become even more polished under its new music director, Patrick Sinozich. The group has just released its second holiday album on the Chicago-based Cedille label, and the first of these four area concerts will also function as a CD release party, complete with a post-concert reception and album signing. Unlike the ensemble’s first holiday album, which was recorded live in concert with an occasional cough or two, “Christmas a cappella: Songs From Around the World” was recorded in University of Chicago’s Bond Chapel in blessed silence. Resisting the temptation to show off familiar works, Chicago a cappella provides us with an engaging album of all-contemporary music and arrangements related to Christmas and Hannukah that span some six continents and a dozen countries. Much of this repertoire will make up this area “Holidays World Tour,” which in addition to hitting the usual downtown, Oak Park and Evanston acoustically superb venues, will also touch down in the western suburbs at North Central College’s new world-class Wentz Concert Hall, Chicago a cappella presenting the first professional choral concert presented in that venue. (Dennis Polkow)