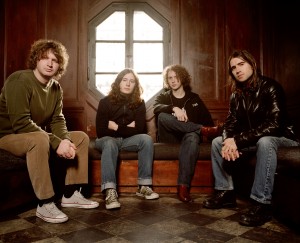 As the subject of the indie documentary “Golden Days,” Brooklyn’s pop/rockers The Damnwells played a part in an all too-familiar story: Band forms and tours to rising acclaim, band signs to record label, record label screws band big time, band is oh-so-sad/resilient. Two years ago, Epic Records dropped The Damnwells after the band turned in what was supposed to be their major-label debut, a collection of tighter-than-spandex pop songs called “Air Stereo” (subsequently picked up and released on Rounder Records) that seems tailor-made for radio success. Bandleader Alex Dezen croons with the sort of semi-strained pipes that singer/songwriters ache for, his simple, country-friendly melodies aptly complemented by his bandmates’ straightforward, no-frills approach. Pop songs often become bogged down in overcooked production or overly ambitious arrangements, but “Air Stereo” works because it doesn’t try to do too much, achieving a delicate balance between top-40 appeal and indie-rock sensibilities. (Andy Seifert)