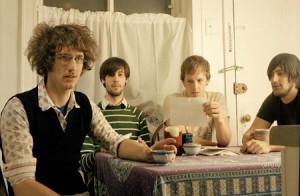 On the surface, local indie-rockers Maps & Atlases seem a little too similar to a bunch of bands I really hate—math-rock attitude, repetitively jerky rhythms, guitar riffs that blindly adhere to some obscure scale. But I can’t hate—these guys are too lovable, and their music is just way too infectiously joyous and innocently excitable. To reject these guys would be like actively loathing Santa Claus. The band’s newest EP, “You and Me and the Mountain,” bounces around, takes twists and turns and establishes singer Dave Davison as one of Chicago’s most engaging sing-along songwriters the city has to offer, while the rest of the band (even the guitarists) help make the album a percussive wonderland—with tapping, tambourines and a bunch of sounds with no distinctive instrument to point at. The result is bizarrely irresistible—math-rock for the type who thinks that that shit sucks. (Andy Seifert)