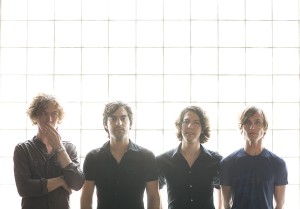 If you spend considerable time reading interviews with rock stars, you’ll find that there are two types of musicians; the first type sees their art as something packed with meaning, that, intentionally or accidentally, some sort of deeper significance crept in between the lyrics, the melody and the guitar solos. Some from this type use the same terminology as a Pitchfork review to explain their medium of self-expression or say things like “there’s really an inherent aesthetic duality to the album’s sense of identity” or consider every song and every album they conceive to have its place in their existential history. Music, to them, is at least partially meant to explain their social situations, their romantic entanglements, their political beliefs, etc. And that’s cool.

The other type is where Longwave songwriter Steve Schiltz falls. This type couldn’t care less about all that stuff—the point of music is for it to sound good and to have a little bit of fun making it. Anything more is bonus. For Schiltz, it’s just not really his thing. When asked if there where any major themes or motifs he was aiming for or that manifested on Longwave’s new album, “Secrets are Sinister,” Schiltz, speaking from Penn Station in New York, says, “No, I tried a little bit of that on the last Longwave record [2005’s ‘There’s a Fire’], and it didn’t go as well as I had hoped.”

“I think this is just what we sound like now, and our previous records were what we sounded like at that point in time,” he says simply. At the very least, it seems that now Schiltz and his NYC bandmates have realized—perhaps unconsciously—that rock ‘n’ roll bands are supposed to, you know, rock. “Secrets” opens with “Sirens from the Deep Sea,” which begins with the usual guitar jangle you’ve come to expect from the band before expanding (big time) with fuzzy, arena-sized distortion and layers of electric axes. The rest of the album follows suit, revealing itself as a straightforward alt-rock (with a subtle nod to shoegaze) album that relies on guitar solos as the lifeblood of most of the tunes.

Certainly, it’s a surprise just to hear how much Longwave has changed since the days of its 2001 debut “Endsongs,” when the band was stylistically lumped into the New York scene with emerging garage-rock superstars The Strokes, but the bigger surprise might be that this record exists at all. A series of unfortunate events—canceled tours and being dropped from RCA (which was in the midst of a corporate merger)—pushed the band into a three-year hiatus, one that threatened to become permanent. Guitarist Shannon Ferguson and drummer Jason Molina took the time to play with their other project, Falcon, while Schiltz spent some of his time as a guitarist in Albert Hammond, Jr.’s band. “[Playing with Hammond] was great for me because it was much less pressure,” he says. “I could just bring a couple glasses of wine and play guitar solos and make feedback—it was amazing.”

With other projects to dabble in, Longwave’s future was somewhat up in the air. Ultimately, the question of whether or not to continue Longwave wasn’t so much an artistic one to Schiltz, but a practical one.

“I guess what it came down to was Shannon and I, in particular, deciding that we wanted to do another record together,” he says. “Shannon and I have a friendship that to me is more important than the band. And so, if it was going to be a problem for either of us in our lives, if there wasn’t enough money at hand anymore, if there was going to be any problems making a record, we didn’t want to do it. But in the end, we like playing together, all of us like playing together, and we decided to do it.”

And so that’s the happy, rationally decided next step for Longwave, who have unsuspectingly undergone some serious evolution from the sprightly lads nine years ago to the rock ‘n’ roll juggernaut of today—though Schiltz insists the guitar tone has remained the same since their 2003 hit “Wake Me When It’s Over,” that the group writes many of its songs by “just jamming” with each other like a typical garage band, and, while there’s been a fare share of drummers in the band, that Molina “is easily the most handsome drummer we’ve ever had, so it’s always nice to look over and see him working hard.”

As for the Longwave live show, Schiltz can only joke about doing something more than simply playing the songs. “Inflatable pigs, confetti…nah,” he quips. “This next tour we’re just trying to take it easy financially. Just us and a couple of friends, just us setting up our own shit. There’s no irony, really. No trucker hats or ironic mustaches. It’s just us. It’s us, we play our records.”