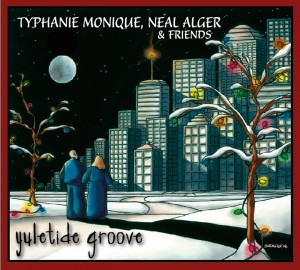 Chicago jazz singer Typhanie Monique and guitarist Neal Alger team up with a host of Chicago jazz friends for a festive and fun yet meaningful holiday album. Tony Monaco’s Hammond B-3 organ adds a blues tinge and despite a wealth of great participation all around, the album’s most eloquent moments are the quiet Monique/Alger duets, most notably the World War II “I’ll Be Home for Christmas” with its rarely heard ethereal verse that makes clear that the person in the song cannot possibly go home, except in dreams.

Despite a handful of radical misfires where Yo-Yo Ma is playing blues licks on his cello alongside the likes of Diana Krall and Chris Botti and, yikes, soprano Renée Fleming trying to sing breathy pop, there are some real gems contained here, especially James Taylor’s three-quarter-time cover of “Here Comes the Sun” (you know, after the winter solstice?) on acoustic guitar with Ma’s beautiful punctuations and stunning track contributions from Dave Brubeck, Alison Krauss, Paquito D’Rivera, composer Osvaldo Golijov and several members of the Silk Road Ensemble for an album of unusual and festive music of renewal from around the world.

In his entire long career, Tony Bennett has only released a single Christmas album back in the 1960s, “Snowfall,” which has been repackaged countless times and which is not, frankly, one of his better efforts. Producer Phil Ramone and the Count Basie Big Band were recruited for a brand new holiday album that has been so carefully and lovingly done that the results are astonishing: Bennett continues to amaze, even at the twilight of his career. This group tears up Yuletide classics, most notably the most energetic rendition of “Santa Claus is Coming to Town” out there, but Bennett can swing quietly as well, giving poignancy and new meaning to shopworn classics. Jule Styne’s “The Christmas Waltz,” a Sinatra holiday favorite, and “My Favorite Things” are highlights.

If Sarah Brightman warbling her way through carols like a distant Minnie Mouse on steroids in a maze of New Age mush is not your idea of holiday cheer, nor Faith Hill’s high notes breaking your Christmas lights, try a more somber and velvet approach from Loreena McKennett. This is a contemplative album that is joyously under-produced with plenty of acoustic instrumentation and songs of the season that reflect the darker corners of the season but always with the promise of spring around the corner.

Chicago a cappella, “Christmas a cappella: Songs from Around the World” (Cedille)

Resisting the temptation to showcase merely familiar works, Chicago a cappella provides us with an engaging album of contemporary music and arrangements related to Christmas and Hannukah that span some six continents and a dozen countries. The virtuosity and diversity exhibited is no less impressive than the fact that one track carefully follows another to make an engaging whole, a real rarity in holiday albums of such enormous breadth. And despite the fact that each of these artists is a professional singer often used to the solo spotlight, the singing in each and every case is balanced with great attention to an overall ensemble and group sound. (Dennis Polkow)