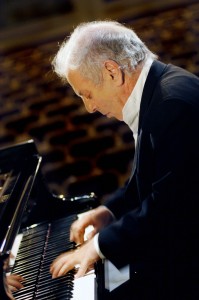 If anyone has been worried about Daniel Barenboim keeping busy since he left his job as music director of the Chicago Symphony Orchestra two and a half years ago, no worries. This week alone, Barenboim made his long-overdue debut conducting Wagner’s “Tristan und Isolde” at the Metropolitan Opera and played the world premiere of a new piano and orchestra work by Elliott Carter on Carter’s 100th birthday. Meanwhile, he is conducting his East-West Divan Orchestra made of Palestinians and Israelis in concerts across the country and, oh yeah, he’s giving three solo piano recitals, including one this week in Chicago, which notably is not taking place at his old stomping ground of Symphony Center, but rather, at the more intimate Harris Theatre. This is Barenboim’s first Chicago appearance in two years, and it focuses on what he has been doing since he was a child prodigy: playing the piano. Barenboim has conducted very little Liszt, but this rare recital will be devoted exclusively to the father-in-law of Barenboim’s favorite composer Richard Wagner, a man whom Barenboim has consistently said he does not think would have developed the same way without Liszt’s fertile imagination at his disposal. Barenboim sees Liszt as a great innovator whose later piano works were the bridge between the late chromaticism of Wagner and the breakdown of tonality in the early twentieth century and plays them very much in that spirit. There will also be plenty of Liszt’s famous opera transcriptions and parodies. (Dennis Polkow)