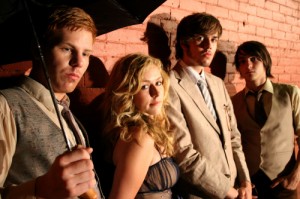 I don’t believe in guilt by association, but I do believe in guilt by associations. One bad connection can be overlooked, but anything more than one and you better have a damn good excuse. So, apologies to Lisle-based piano-rockers The Hush Sound, but signing to Fall Out Boy songwriter Pete Wentz’s label, touring with Panic At the Disco! and, most damning of all, allowing one of your best songs (“Hurricane”) to be played during a “Young and the Restless” commercial amounts to three strikes even before listening to the actual music. Even so, listening to DuPage County quartet’s newest album, “Goodbye Blues,” it’s evident the band’s trying to solidify a persona outside of its labelmate’s occasionally annoying catalogues—the album is filled with big, old-timey anthems with a helluva lot of production and the occasional decent bluesy solo. “Goodbye Blues” may be a noble idea and a fine effort, but it’s a blues album without any sincere soul, and if Eric Clapton can’t pull that off (and he’s tried), then how can The Hush Sound? (Andy Seifert)