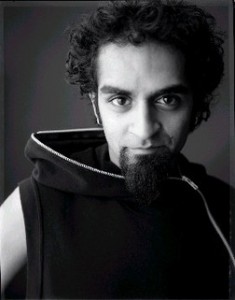 A London-born musician of Indian descent, Karsh Kale he brings the influence of his parents’ native land, blending them with today’s musical tendencies. In a live setting, he always brings an eclectic musical palette by using recorded loops from Indian singers blended with his  live band, which includes keys, guitars and Middle Eastern instruments. While growing up, he listened to a lot of jazz and Indian music, but he was also into the likes of electronic groups as Depeche Mode, Devo and Kraftwerk. He began playing tabla at an early age—his first gig was at age 9 ,when he played tabla at a local cultural center accompanying three classical Indian vocalists. Kale has covered a lot of ground through his career, recording with one of last year’s most enjoyable World Music Discs, “Breathing Under Water” (Manhattan/EMI) with sitarist Anoushka Shankar. A natural-born musical experimentalist, he has also worked with The Midival Punditz, Persian Fusion band Niyaz and many others. Though he has a large fan base among Southeastern Asians, he has also found an increased following thanks to his open approach toward his art, which crosses cultural and racial barriers with incredible ease. (Ernest Barteldes)