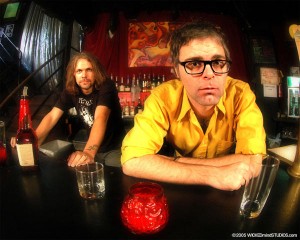 The always energetic and powerful live act Local H brings home a great year for the band—“Twelve Angry Months,” the local duo’s newest record, was its best in some time, singer/guitarist Scott Lucas tracing the year-long recovery after a horrible break-up and channeling all the pain, agony, self-hatred, bitterness, loneliness and, eventually, recovery, that comes along with it. It was a monster feat, one you would expect a breathy singer-songwriter to attempt, which makes it even more exciting that this record fucking rocks. I guess we shouldn’t of expected Local H to wuss out on us now, but anything’s possible, right? I’m happy it didn’t happen. When “Twelve Angry Months” was released, I talked to Lucas and, while comparing the new record to those from the band back in the nineties, suggested that now there’s a more raw, battered edge to the material, less of a pop gloss. He disagreed and I think he got mad at me, but I stand by my assessment, even if it was more of a response to the album’s emotional wreckage than it was to the actual music. Either way, Local H remains an incredible live act, and “Twelve Angry Months” is one of the top local records of 2008. (Tom Lynch)