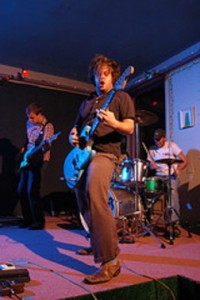 The punishing and inescapable Tight Phantomz bring in the new year on pub Quenchers’ tiny stage, and one can only imagine the havoc that the Chicago band will wreak on the room. A mix of classic-rock riffage, punk and rough-around-the-edges indie rock, the Tight Phantomz sound boasts a relentless aggression, exhilarating and terrifying and all in between. It’s monstrous, and on stage, an assault. On top of that, the band’s performance style is fit for a party, if you could believe that. They’re not here to oppose you, they’re here to be with you, and the louder it gets the closer we all move together. (Tom Lynch)

[…] White Mystery. If that show were to sell out, my friend Pete’s band Tight Phantomz is also playing in Chicago that night. But in order to get myself to either show I have to make arrangements for my […]