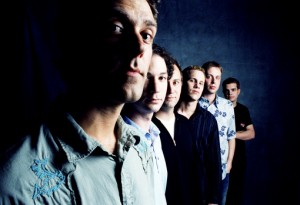 Although this local band has much in common with other groups within the jam-band community (ever-changing set lists, open-taping policies), the music it makes clearly comes from a completely different place—instead of basing its sound on The Dead or Phish, it seems to borrow from the likes of progressive rock bands like Yes and Genesis with a touch of Led Zeppelin, Beatles and also some jazz—early in its career, it would include Vince Guaraldi’s iconic “Linus and Lucy” among the handful of covers included on its set lists. A decade into their careers, Brendan Bayliss (guitar, vocals) Jake Cinniger (guitar), Joel Cummins (keys), Ryan Stasik (bass), Kris Myers (drums, who replaced Mike Mirro in 2002) and Andy Farag (percussion) have evolved into an accomplished group with incredible musical chops, as heard on its 2007 release, “Live At The Murat.” The band never stopped including covers on its set list—favorites include guitar-heavy version of The Beatles’ “I Am The Walrus,” Eric Clapton’s “Layla” and The Who’s “Baba O’ Riley,” all of which have recognizable elements from the original recordings while also showcasing the band’s improvisational skills, which for them comes in droves much to the delight of its growing fan base. The band has a new CD entitled “Mantis” in the works for 2009—in the meantime, enjoy this year-end show, which includes some big name guests, including Buddy Guy, Joshua Redman and the elusive Stanley Jordan. (Ernest Barteldes)