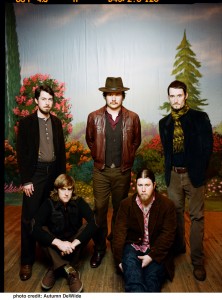 How exactly do you top: an appearance on “Saturday Night Live”; performing on “The Late Show with David Letterman” with the Boston Pops; and feature time slots at Lollapalooza, Coachella and Bonnaroo, the last of which included an exhausting, nearly four-hour-long set in the middle of the night? My Morning Jacket’s answer: a two-night stint at the Chicago Theatre and a New Year’s Eve party at the king of arenas, Madison Square Garden. Aside from three straight nights at Wembley Stadium (with special guest Brian May), I’d say that’s about as epic as it gets.

Kentucky’s own My Morning Jacket has spent 2008 recording and touring on “Evil Urges,” the follow-up to the critically acclaimed “Z.” Where “Z” solidified the exponential growth of the band’s fan base, it seems “Evil Urges” was meant to divide the loyal masses. While one of the band’s charms has been its boundless eclecticism (MMJ has been no stranger to, among other genres: southern rock jams, space-rock interludes, psychedelic experimentation and old-school country melodies), the opening tracks of the record still came out of left field: Prince-inspired funk, big-ass choruses and extremely high vocals. Surely, when singer Jim James started busting out the falsetto squeal (especially for the chorus of the polarizing “Highly Suspicious”), the band could envision the mixed reviews.

“It’s about how we expected it,” drummer Patrick Hallahan says about the reception to “Evil Urges.” “We expected it to be met with skepticism. We expected it to sort of split our fan base down the middle pretty much, cause there are people that like the older stuff and want us to continue making the same album over and over again, and there are people that are supportive of any growth that we want to take on. So we knew that this one would definitely separate those two sides of the audience.”

The funkadelia of the opening tracks act as a prelude foreshadowing an album that never really settles on any genre. Disco jams, southern rock anthems, country-folk and smooth soft rock are all attempted MMJ-style, which quite literally represents the ultimate artistic goal for Jim James and company, and not just for this album, but for the entire catalogue of the band.

“Honestly, I can’t put a categorization on what our band sounds like now, and I think it’s because our roots changed over time, we always listened to a bunch of different things,” Hallahan says. “If you’re never one thing then nobody expects you to be that one thing, and you have room to grow. We really like that great creative freedom.”

If the band’s unwillingness to settle on a sound drove people from the band, then it’s not showing in ticket sales. Needless to say, you don’t play Madison Square Garden without putting a few asses in the seats (unless you’re the Knicks), and tales of the band’s live antics have something to do with it. The four-hour stint at Bonnaroo (including James Brown and Motley Crue covers), the “Under the Sea” prom in Athens, Georgia (complete with cakes, mermaid costumes and “Earth Angel”) and the Donner Party-themed show in San Francisco (where the band dressed up as hunters and Native Americans, then “killed” and “ate” bassist “Two Tone Tommy” Blankenship) all beg the question: where the hell do these guys come up with this stuff?

“We really are living our dream, this is something that we’ve always wanted to do since kids, so we’ve had plenty of time to conjure up scenarios that can now be put into motion,” Hallahan says. “Our brains are always rolling. We’ll be sitting around on the bus or backstage, and our concert themes always seem to start with, ‘Wouldn’t it be funny if…’ or ‘What if we could pull this off…'”

It’s worth noting, since a lot of these scenarios seem reminiscent of ideas that high-school musicians/aspiring rock stars concoct while dreaming of fame and stardom, that James and Hallahan have been very close friends since grade school, and that Hallahan can confirm what already was obvious: James still sort of has that childlike bounce to his step.

“You know I think that’s something I could say about all of my friends, including Jim,” he says. “Everybody’s maintained the youthful spirit that we befriended each other with. We’re 30 now, so I hope there’s a little more sensibility, but the spirit is the same.”